Just like our own Milky Way, the Andromeda complex possesses at least 14 dwarf galaxies. Best known are M32 and M110, close to M31 and both awarded with a Messier title. Less known are NGC 147 (Caldwell 17) and NGC 185 (Caldwell 18) and both can actually be found in Cassiopeia, far in the north. These Andromeda’s satellites are less bright (especially NGC 147) and need a dark sky for proper visibility. The other ten dwarfs (AND I – X) can’t be seen with amateur telescopes.

The elliptical shape is clearly visible, but this large galaxy is truly dim. An obvious core is missing and it makes the glow almost translucent. With averted vision, the galaxy extends very far before it neatly fades into the background. A foreground star is visible just left (west) and under the center that could be mistaken for a stellar core. Besides this faint star, two more are visible within the glow. A darker area is seen west of the galaxy where there is just a bit less star sprinkle.

Large and almost round; with effort the elongation is visible. This galaxy does have a core zone that covers about 50% of the total glow. Notably, this glow is not smooth, but has a rather grainy structure, like an unresolved globular cluster. I’m not sure if this is just an illusion or if it’s the real texture. Many (faint) stars can be seen in the field and I tried to add as much as possible in the drawing. 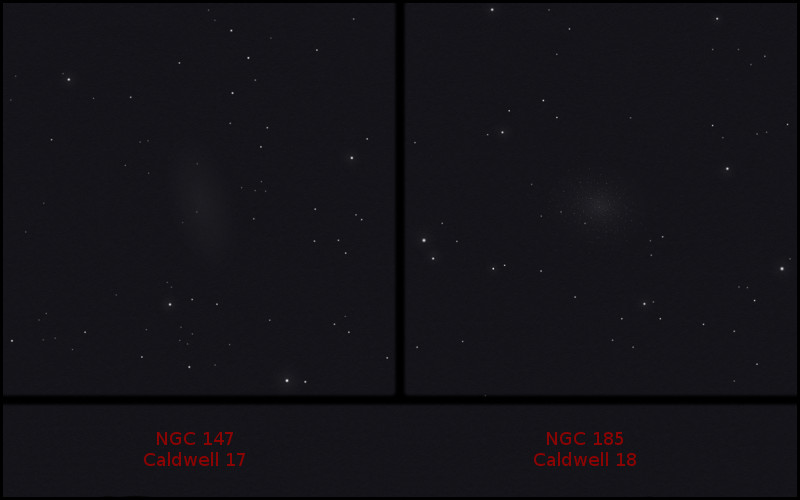