Like with the Messier catalog, there’s a wide variety of globular structure in the Caldwell objects too. Not one single cluster looks the same! That is if you are prepared to spend time on the target and give it the attention that it deserves. Unfortunately the Caldwell globs are not evenly distributed in the sky. If you are located in the northern hemisphere (like me) then you will notice that only 3 objects can be seen at a decent declination. For all other 15 (!) you will need to head as much south as possible for a decent view.

NGC 2419 (C25) is the most northern one on the list and it’s the one at the largest distance from us. It’s for a reason that it’s called the “Intergalactic Wanderer”. At about 300.000 light years away, nothing more can be seen than a round nebulous object. I could resolve no stars in it, although some dim stars can be seen in the direct vicinity, as well as three bright stars that seem to point directly to it. Sketched with the 10″ Alkaid @171x. 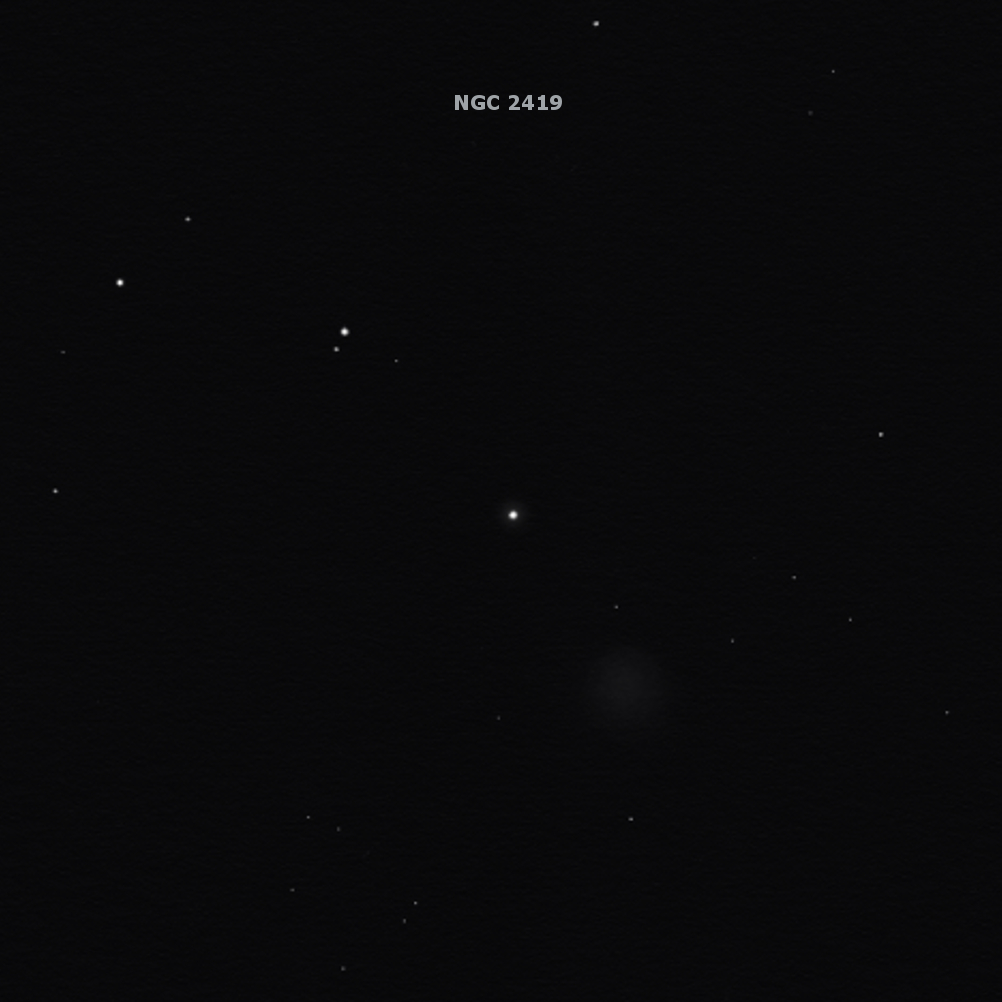 Two more of the northern Caldwell globular clusters are located near each other in Delphinus and appear very different from each other. I sketched both within the timeframe of a month.

NGC 7006 (C42) is very small and condensed and does not immediately appear as a globular cluster. At first glance it looks more like a galaxy and only when increasing the magnification, the grainy texture becomes somewhat apparent. The shape is perfectly round and the 2/3 center is pretty much evenly illuminated. With AV a 1/3 glow is visible around it. Sketched with the 16″ Alkaid @362x 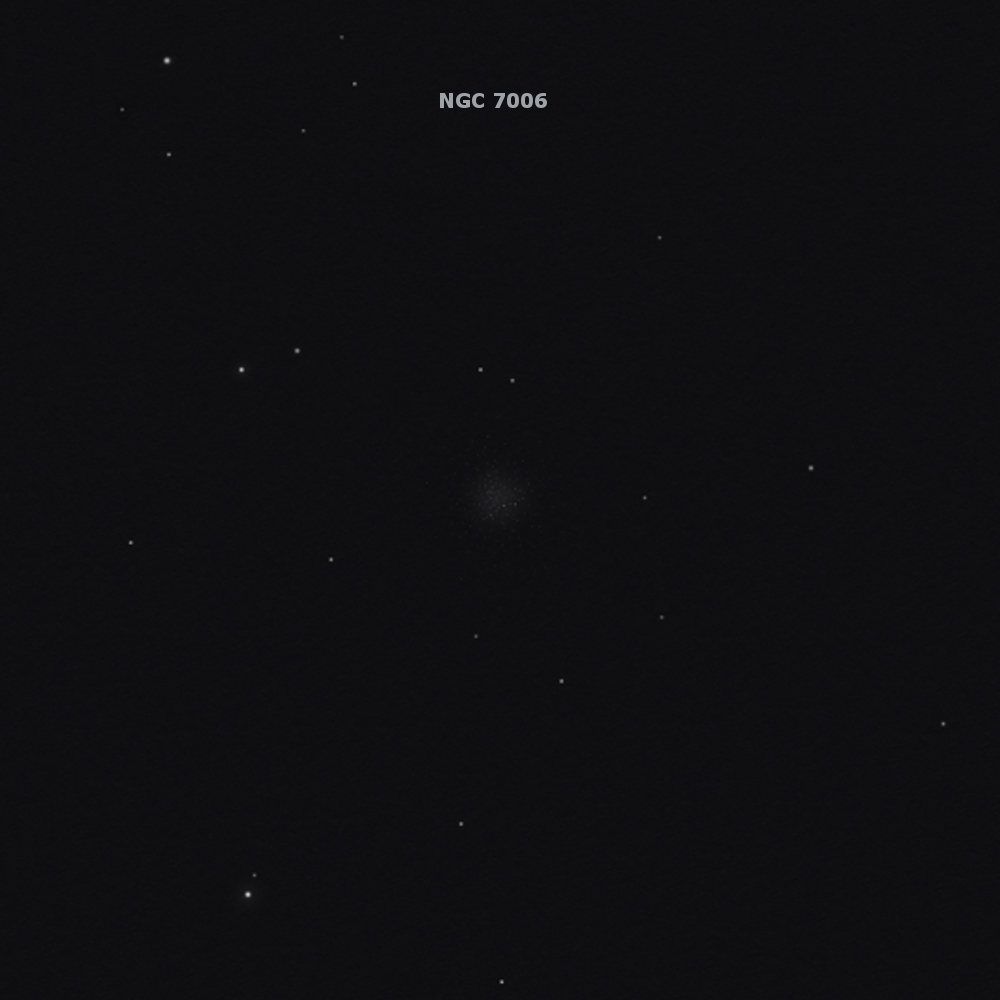 NGC 6934 (C47) is a nice glob that does not appear very concentrated. The core is not much brighter and with AV some stars can be resolved. A large halo of graininess can be seen, almost up till the brightest star in the field. The shape is certainly not round; on the right side three extensions are visible, making the cluster appear like a shuriken. Sketched with the 16″ Alkaid @259x. 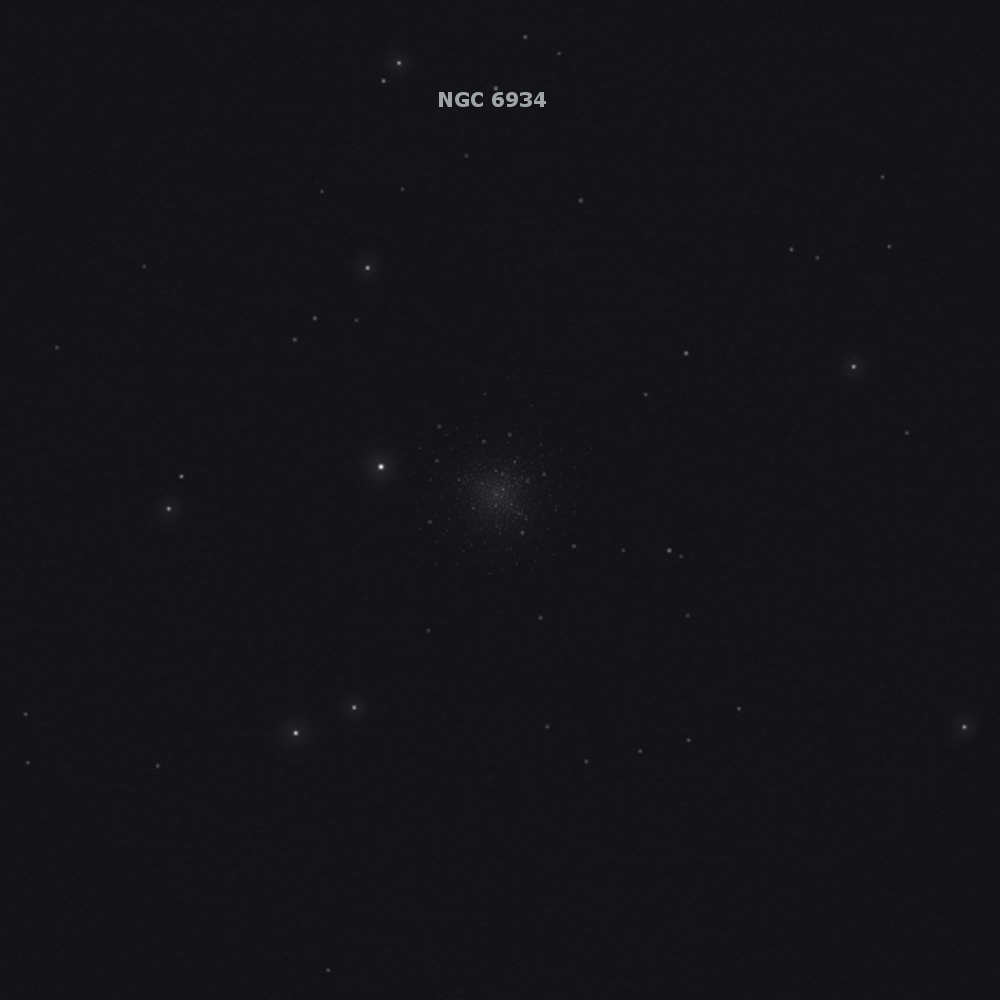 On La Palma I have observed many more globular clusters and part of those can be found in the Caldwell list too. In 2019 I aimed the 10″ Alkaid at two objects that differ a lot in size. Both were sketched with the 5mm at 240x.

NGC 5694 (C66) is a very small and dim cluster in Hydra. The core has a droplet shape and is only a bit brighter than the surroundings. The core area is relatively large and the graininess can barely be seen. Therefore it’s not very imposing.

NGC 3201 (C79) on the other hand is huge! The rhomboid shape shows a loose structure, only a bit more concentrated towards the core. Some nice star chains run away from it, but one is cutting straight through. On closer inspection, some dark spots are visible on the foreground and at least three of them can be held long enough to draw them with confidence. Even this far south, the glob hangs low in the sky and the light travelling from it through the atmosphere is smothered to some degree, which has its effect on the resolvability. I can imagine that when this one would be observed in zenith it must be quite a showpiece. 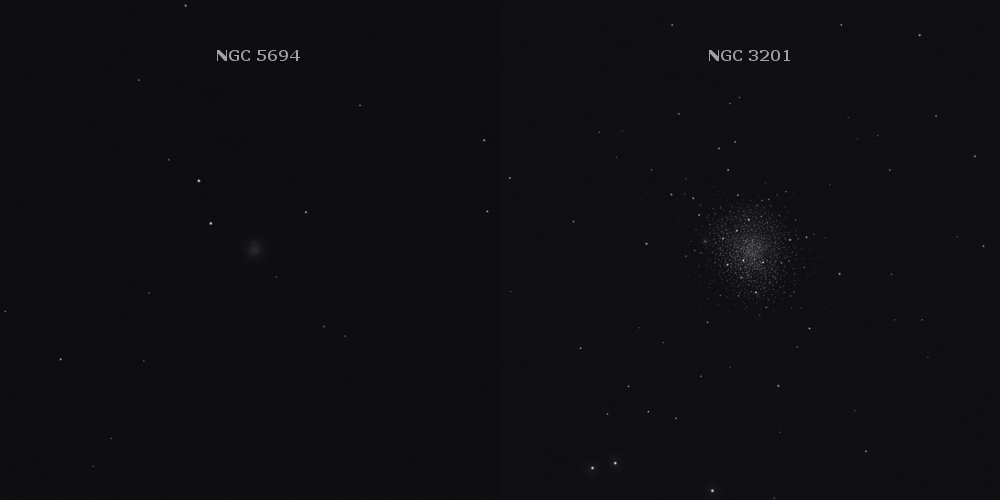 NGC 1851 (C73) is a fairly large and round globular cluster in Columba with a dense and bright (unresolvable) core. In the halo, most stars can be resolved, especially a “V” of somewhat brighter ones around the core. A darker lane is visible directly under the core and the graininess on the left side of the GC lights up just a bit more than in other areas. A beautiful object, even at a culmination of only 21 degrees here at La Palma. Sketched with the 10″ Alkaid @ 171x. 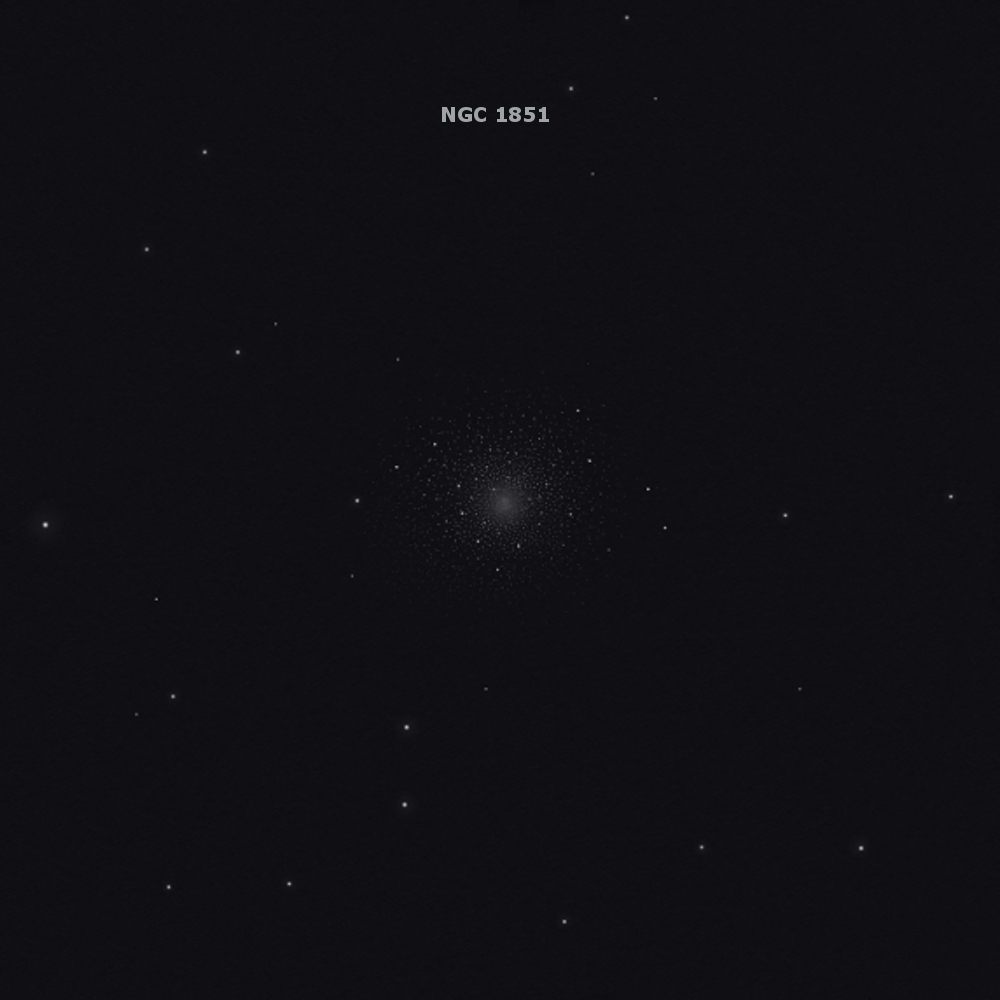 In 2022 I could finally visit Namibia and from there a load of new globular clusters were observed, many of them present in the Caldwell list as well.

NGC 5139 (C80), the most famous one of all is of course Omega Centauri. It’s incredibly large and bright, but not really denser towards the core; the condensation is most evenly spread throughout the whole globe, only fractionally brighter in the middle. The shape is definitely oval and defined quite well near the edges. In the center I noticed two darker pockets, like eyes, with in between them a thin line of tiny stars. Up and right within the cluster a small star chain could be seen, like a short arm. A similar line was seen down and left, but outside of the cluster. On the left side of the core, a few stars in a trapezoid shape shone just a tad brighter. Beside it was one of the few double stars in a rich star field. I decided to sketch this one at the lowest magnification, to seemingly shrink the cluster to somewhat acceptible proportions… Sketched with a 16″ Dieter Martini @58x. 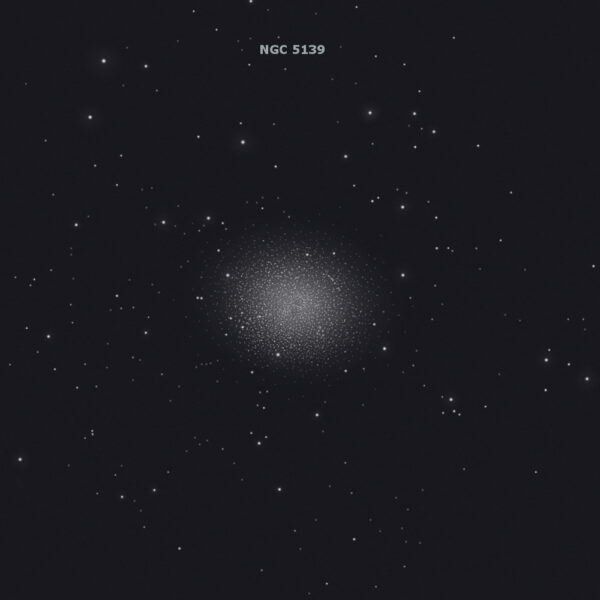 NGC 6352 (C81) is not very bright and appears as a smudge of light on the first impression. But closer inspection (higher magnification) does show the graininess and an off-center core in a bit of an egg-shaped cluster. I could definitely not resolve the cluster, but some stars could be seen flickering by constantly changing the eye position a bit, up to the very core of it. The field is littered with dim stars and some star trails could be followed. One going down and left (dim) and one left of the core (brighter). A very pleasing view, despite the low brightness. Sketched with a 12″ dobson. 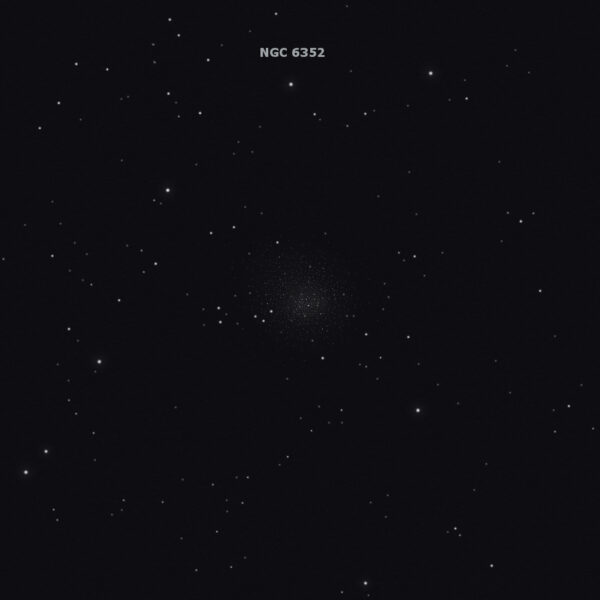 NGC 5286 (C84) is a beautiful cluster, but often overlooked because of nearby Omega Centauri, which gets all the attention. It’s definitely worth a visit because it’s bright, reasonably sized and the grainy texture is well visible. Moreover, a very bright orange/yellow star sits just beside it (m Centauri, m4.8). This makes the eyepiece view very appealing. The globular cluster is slightly flattened and gives that impression even more because of a line of stars at the underside. There are no obvious starchains, but I could easily resolve a single star above and right of the core. Randomly in and around the globe some dimmer stars can be seen flashing up while moving the eye around. Sketched with a 16″ Dieter Martini @257x. 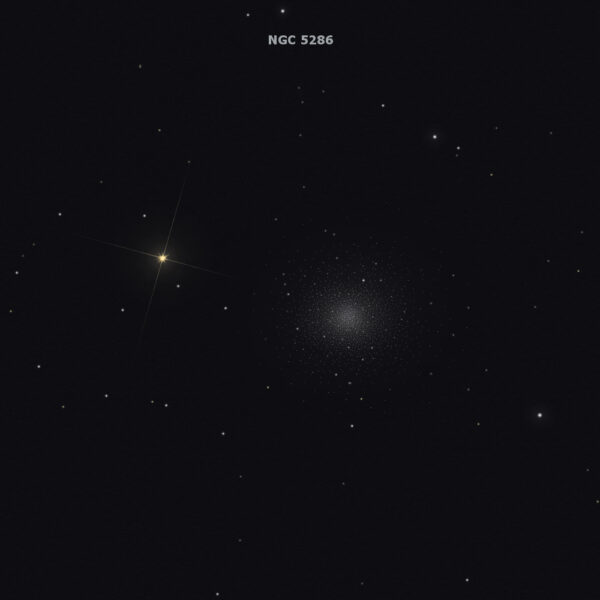 NGC 6397 (C86) is again a beautiful one. It’s bright and many starchains can be followed in the full field of view. The cluster is very loose, with only the heart of the core being unresolvable. Around the core about a dozen pretty bright stars can be seen floating and because of that I had at times more the feeling of looking at an open cluster instead of a globular one. The glow appears perfectly round, more so because it’s bordered by a “half pipe” of dim stars at the underside. Most noticeable is a “bar” of stars crossing the core, a bit like we see in M4 (but less spectacular). Sketched with a 12″ dobson @206x.

NGC 6752 (C93) reminded me a bit of the previous object because also this one is very loose and it has feature in the core as well. Not a line of stars, but rather a small “T” on its side. No less than 5 distinct star chains are seen, more or less at the same distance from each other. This gives the glob the appearance of a “starfish” (also one of its nicknames). Again some dark zones are seen; a bended lane up and right of the cluster and two pockets on the right, encircled by stars. It gives the appearance of a dark “8”. Sketched with a 12″ dobson at 144x. 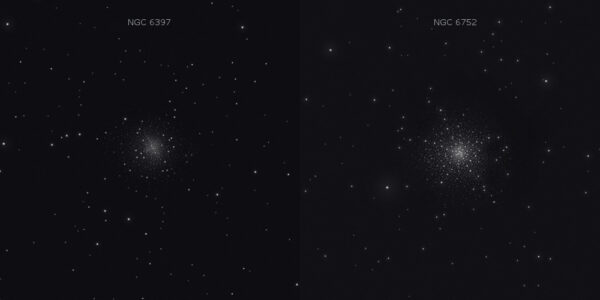 NGC1261 (C87) was a deception. Of all the objects that I observed on the southern hemisphere, this was the one with the least favourable position in the sky. I had to wait until 5:30 am until it reached a mere 25 degrees above the horizon. And it showed. I chose a 10mm eyepiece to still get a decent view, but because of that the cluster remains quite small. I do see a grainy glow, which is a bit shaved at the underside. On the right side I see a small bulge of dim stars. This one needs a revisit when it’s higher in the sky (and when I’m less tired after a night of hard work…). Sketched with a 12″ dobson at 144x. 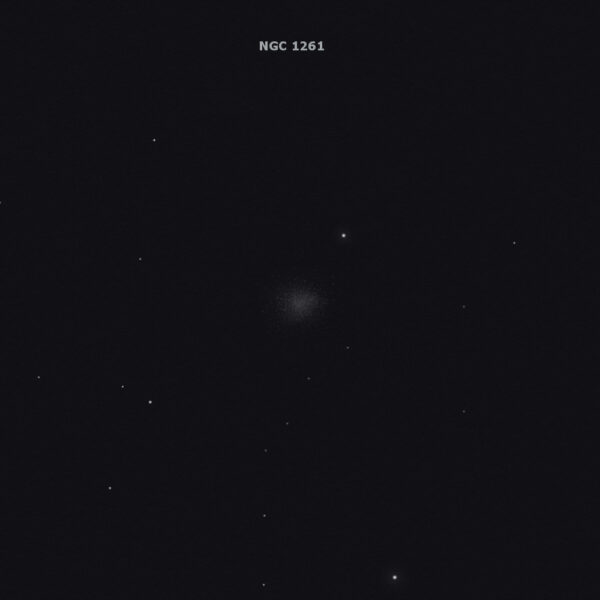 At NGC 362 (C104) I wrote: textbook globular cluster. In other words, a globular cluster as you would expect it to be: bright, not too big, round, with a bright core and with a lot of resolvable stars without too much fuss around it. The globular cluster is compact, well defined and quite concentrated. The inner heart is not fully resolvable and the bright glow of a small nucleus can be seen. At the top I see a weak star chain (like a roof) and at the bottom right of the heap an “arm” of slightly brighter stars can be seen. Nice object. Sketched with a 12″ dobson @206x 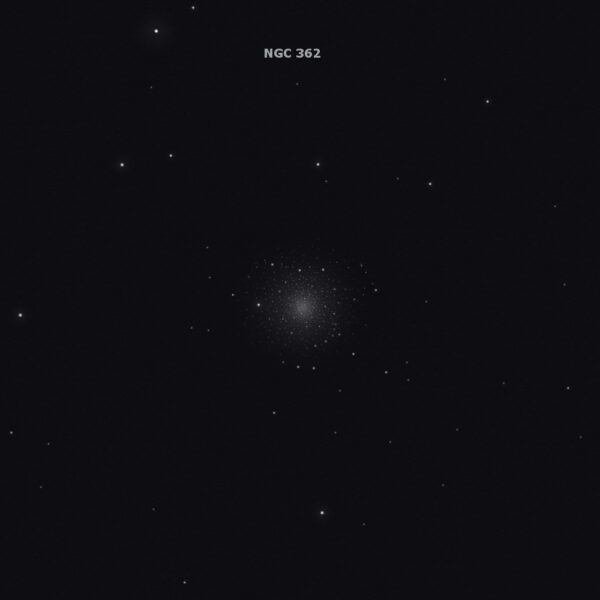 NGC 4833 (C105) appears a bit odd and also quite dim; except for a core zone with blurred graininess there are more patches to be seen; the cluster is fragmented. Under the center there is a clear dark band. Left and above left there are separate zones of dim stars and a line of brighter stars is running through the cluster. Despite the soft appearance, this does seem to be quite a loose cluster which can be resolved well. The field around the glob is littered with stars. Sketched with a 16″ dobson @257x 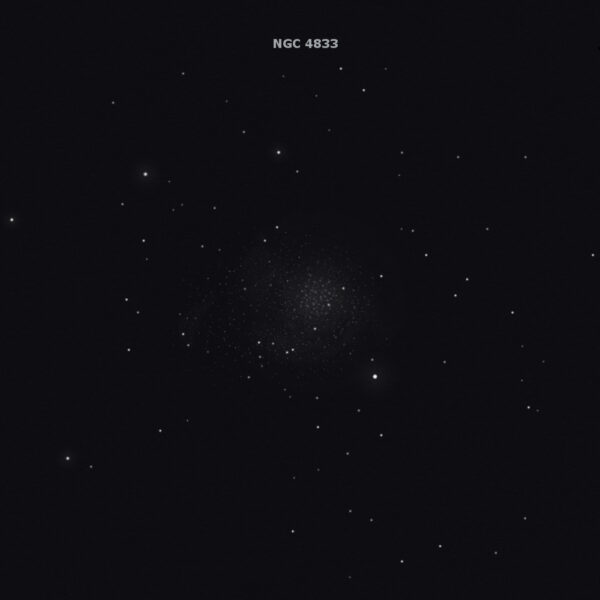 NGC 104 (C106) is a real showpiece; 47 Tucanae is a giant globular cluster and very bright. It can already be seen with the naked eye, even slightly better than Omega Centauri, but through the telescope it is truly a piece of art. Whereas a “normal” globular cluster is always somewhat confined, this one goes on and on almost to the edge of my 14mm (!) eyepiece in an ocean of ​​stars that slowly decrease in number towards the edge. At least a dozen bright star chains can be seen extending to far beyond the center. The core is also a bit odd; it is round, very bright and suddenly ends at a second, slightly less bright layer, a bit oval in shape. This makes the center resemble an eye. The globular cluster can be resolved into countless stars just outside the dense first core. This is my #1 globular cluster, incomparable to any other that I have seen. Sketched with a 16″ Dieter Martini @129x 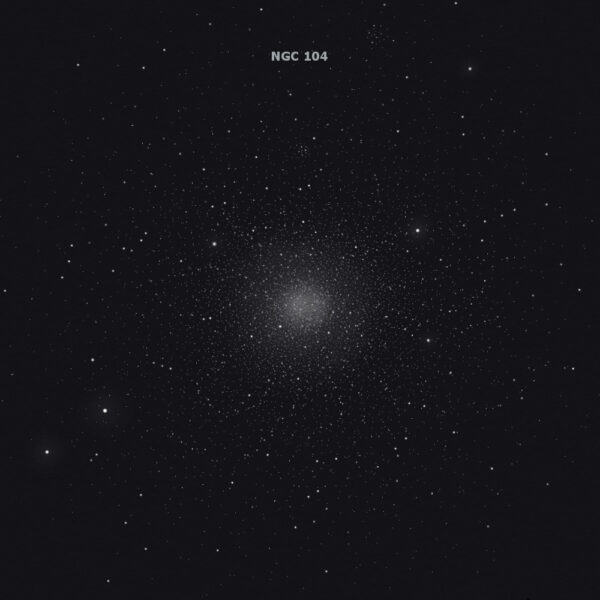 NGC 6101 (C107) is not a very large and rather weak globular cluster, but it is easy to see with direct vision. The shape is more triangular and the S-side (left in the sketch) is somewhat flattened. The texture of the globular cluster is grainy, and there are only a few stars to resolve. These run like a kind of “S” on the left side in the cluster, with a double star slightly above the core and a slightly darker pocket just under it. The brightness of the globular cluster is otherwise uniform. Sketched with a 16″ dobson @257x

NGC 4372 (C108) is not very bright too, but a rather dim granulation can be seen. The brightness is evenly distributed among the glob and not much brighter in the center. There is a “hook” of 6 stars running through it with a bit darker zones in it. The underside of the cluster is more defined, but to the left (near a bright star) the granulation is more apparant. On the right side (under and up) some weak star chains are spotted, which make the cluster appear a bit pointy on that side. Sketched with a 12″ dobson @206x

Here they are side-by-side 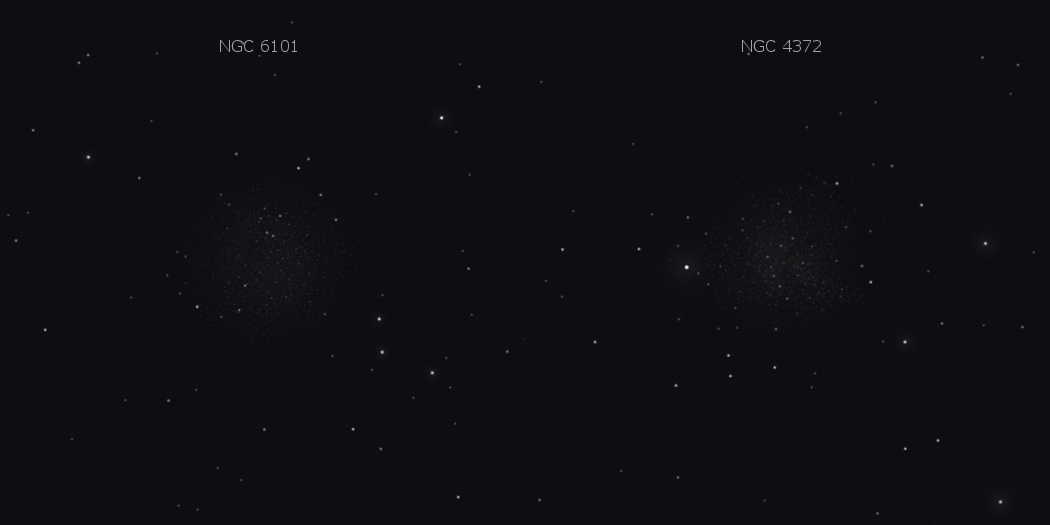