Besides the 13 planetary nebulae in the Caldwell list there are more types of nebulous objects like HII, emission nebulae, bright nebulae, reflection nebulae, one dark nebula, one nebulous cluster, two supernova remnants and even a Wolf Rayet nebula. Each with its own identity and individual features that make it worth observing it. These nebulae will all be shown in this section in time.

NGC 7023 (C4) can be a deception when seen from a light polluted area (where it looks like a foggy star…) But from a dark site, a surprisingly large amount of detail can be seen of this object. The bright star is surrounded by a cloud that is divided in two parts, separated by a dark lane. Some fainter nebulosity spreads out further away, looking like two hooked arms (one a bit brighter). The whole field of view in the sketch is filled with a dark “veil” that covers and dims many stars; switching to a longer eyepiece immediately starts showing many specks of light along the fieldstop. The “Iris Nebula” was an unexpected showpiece. Sketched with the 16″ Alkaid @129x 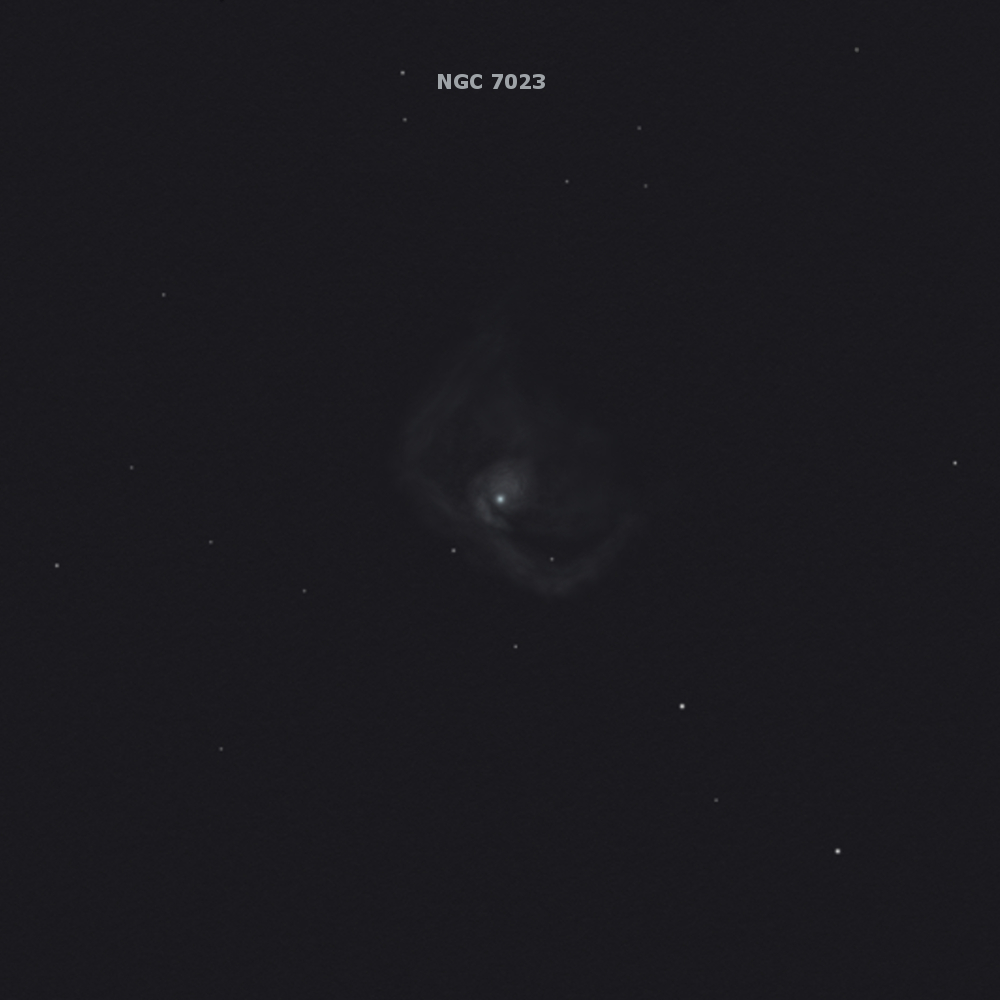 Sh 2-155 (C9) or the “Cave Nebula” is a very tough object and only a tiny portion of it can be glimpsed under a very dark and transparent sky. Slowly moving the telescope in this area shows a slightly changing background brightness. That way it’s revealing that there is nebulosity around, but it’s hard to pinpoint it. That’s why I decided to sketch only the brightest (small) oval patch with two dim stars in it. Sketched with the 16″ Alkaid @362x 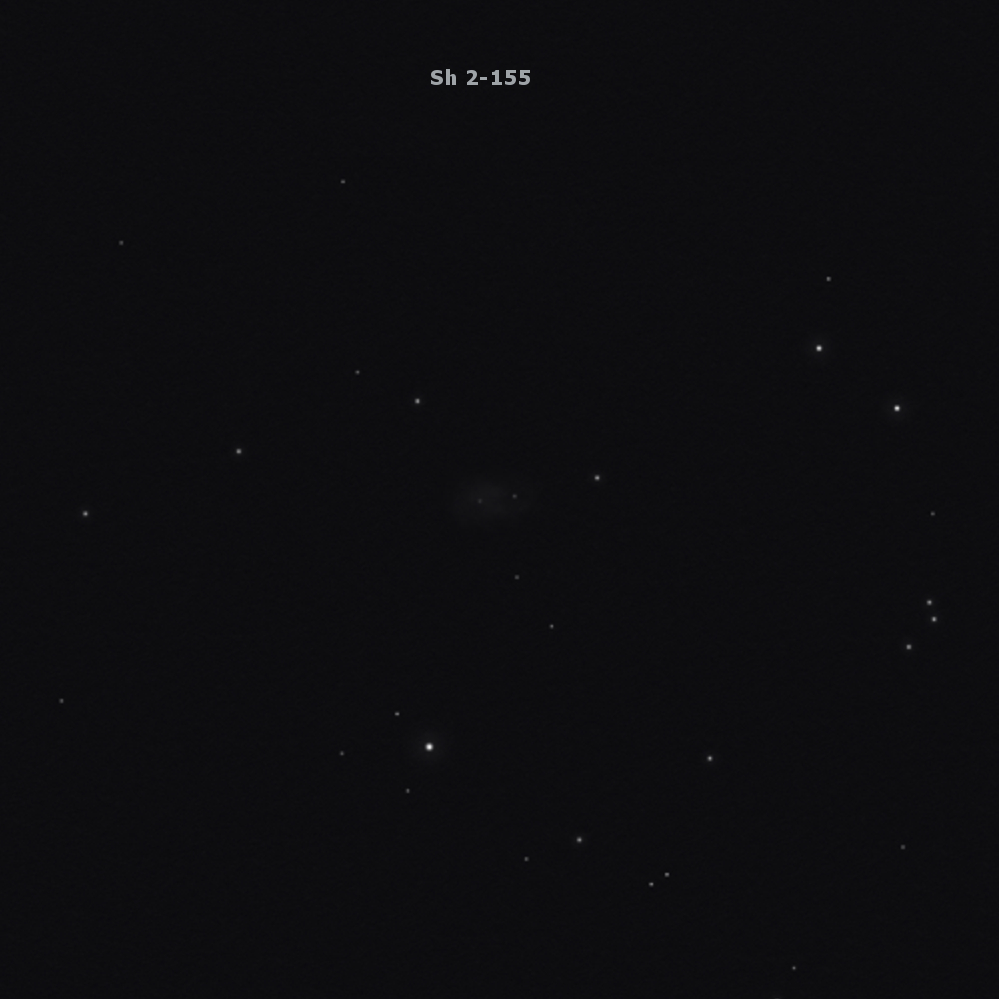 The “Bubble Nebula” is the smallest and best visible portion of the much larger NGC 7635 (C11). It comprises a small nebula around the star SAO 20575. At first, only a bright cloud can be seen as some kind of ring. Closely around the star a clearly darker lane is visible. After extended observation the “rounding” of the bubble is suspected on one side (the entire bubble is nowhere near visible…). More remote from the arc-shaped nebula a dimmer area is visible, but the transparency this night was not good enough to make any more of it. Sketched with the 16″ Alkaid @181x 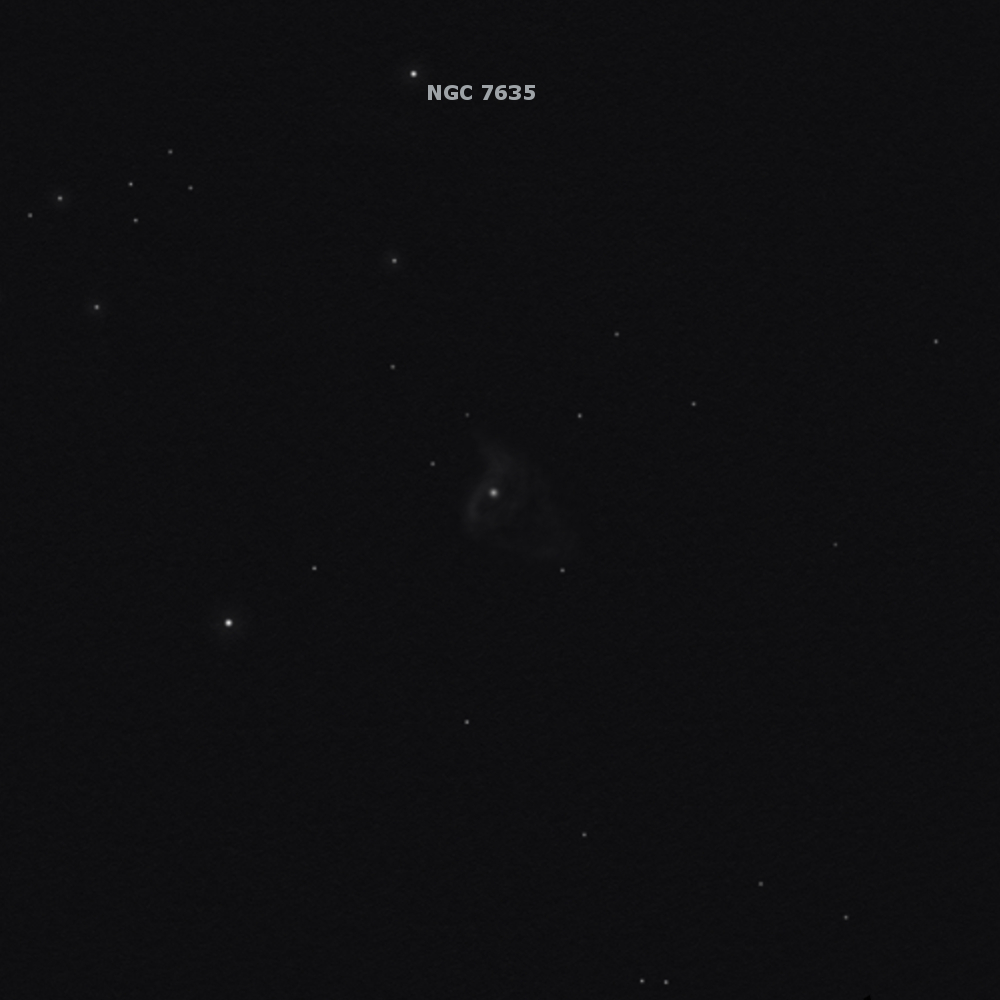 IC 5146 (C19). From a dark location in The Netherlands I was able to spot this illustrious “Cocoon Nebula” with a 10″ a few years ago, but no details could be seen. Now with the 16″ the view was somewhat different. The previously round nebula now appeared more heart-shaped and fragmented; darker areas and lanes make the nebula look this way. One segment on the W side (down and left in the sketch) was clearly seen detached. Furthermore (despite the use of a H-Beta filter) many stars filled the scene. A total of 7 stars could be seen inside the nebula, of which 2 were clearly brighter. Without the filter all contrast seemed to be lost and nearly no nebulosity could be detected. Sketched with the 16″ Alkaid @91x 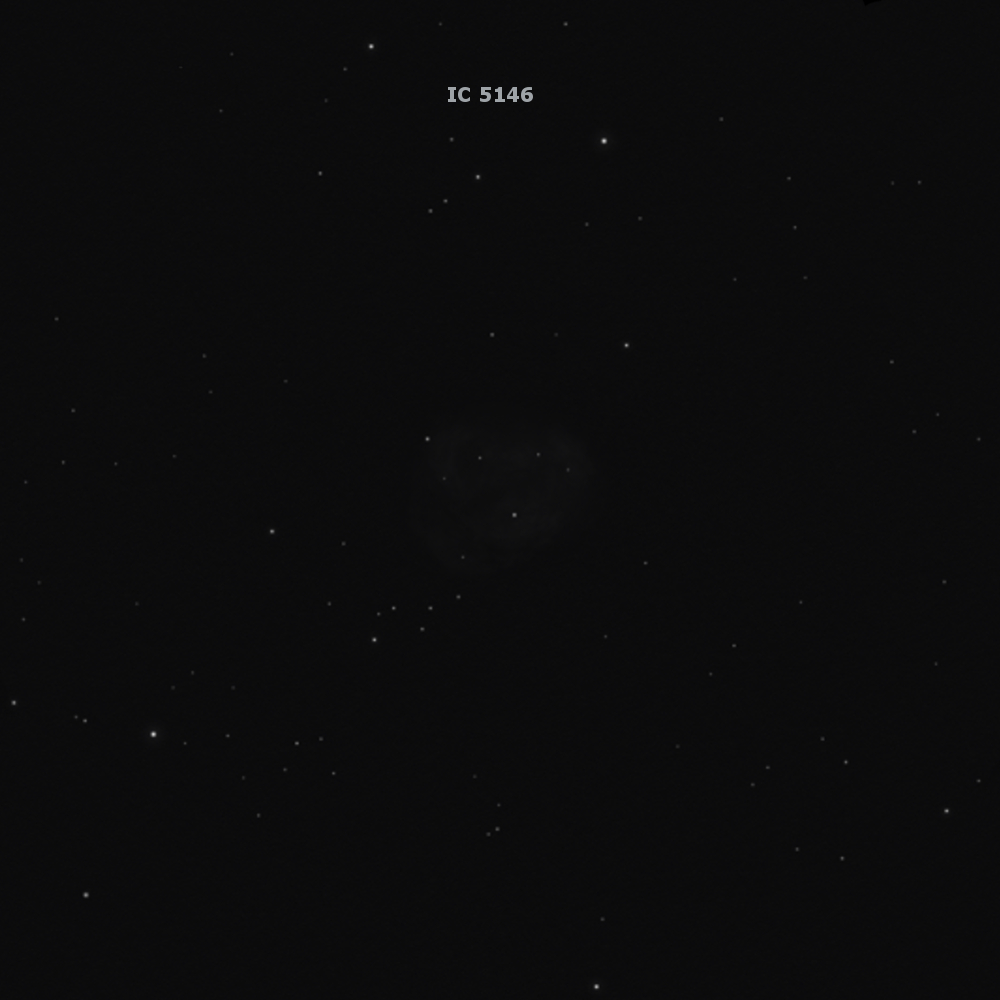 NGC 6888 (C27), the well known “Crescent Nebula” is large and dim and needs a dark sky for proper observation. In the French Valennes I was able to see more than merely the brighter northern area. From here the full “8” can be observed, provided that an OIII filter is used. The beam of nebulosity that cuts the circle in half is forked near a bright star on the W side and in multiple areas some separated spots of nebulosity can be seen. This is a beautiful object, but it demands patient observation to see the wealth of details. 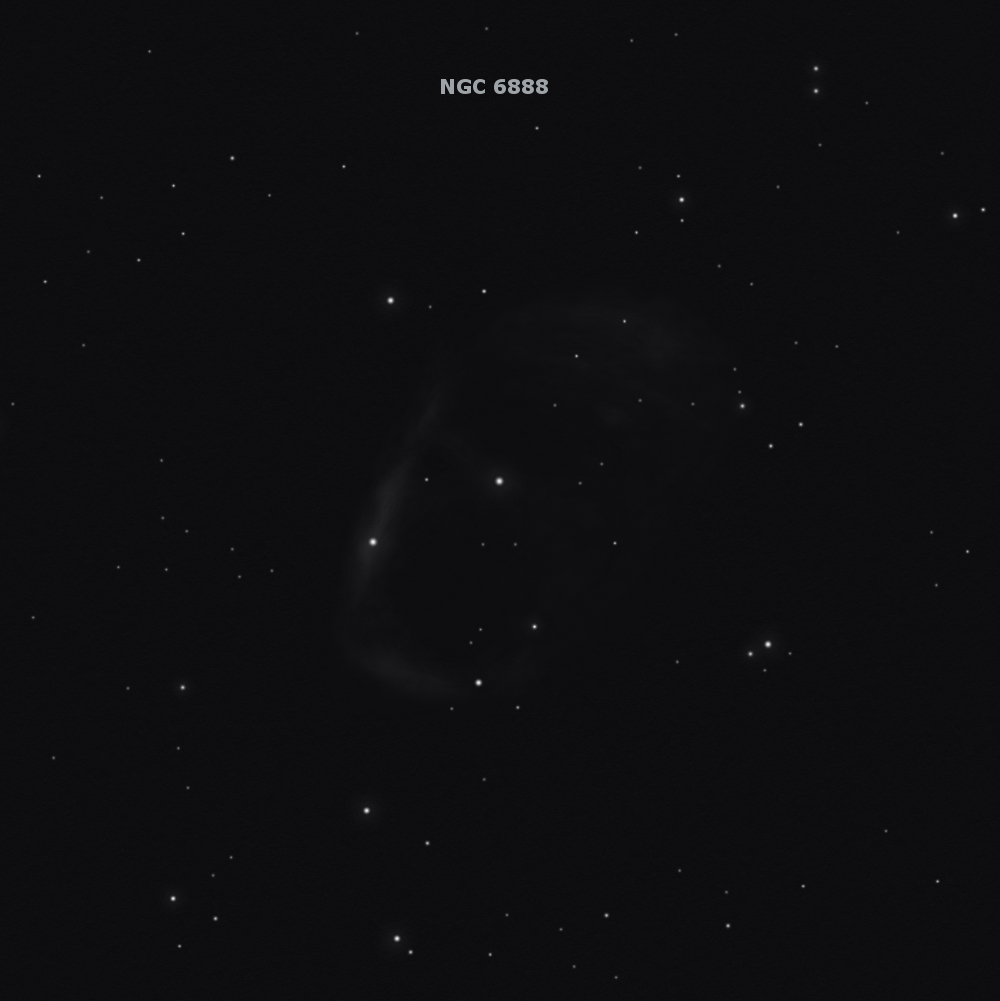 NGC 2261 (C46). The small, but bright “Hubble’s Variable Nebula” presented itself with ease and it almost felt like cheating to draw it… Nevertheless, it took some time to take in all details and transfer the impressions to a piece of paper with confidence. The triangular shape and star at one of the tips are clearly visible. The nebulosity is brightest in that area, while at the underside of the wavy “cape” the nebula fades smoother into the sky background . Just left under the star there is a small curve. Sketched with the 16″ Alkaid @362x. 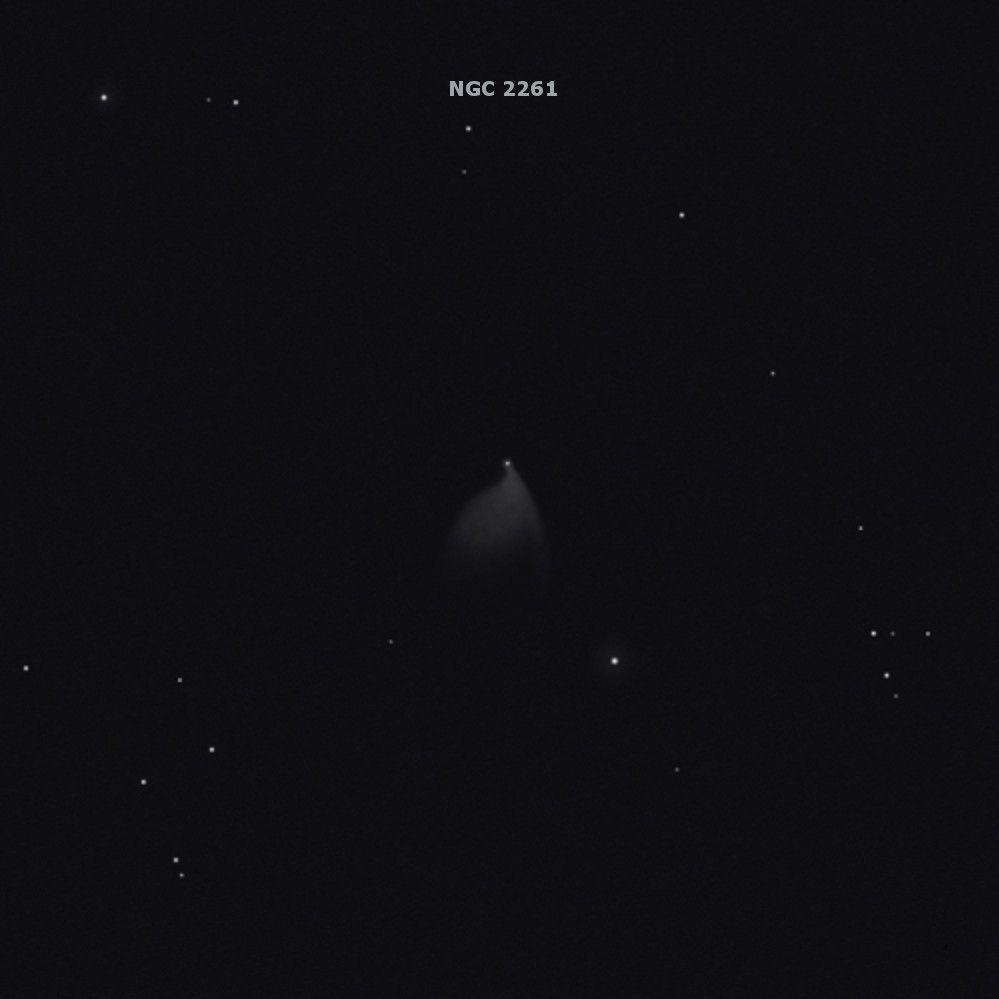