In this section I will go deeper into Messier’s famous galaxies and show the drawings in a higher resolution to focus more on the details instead of the eyepiece view. It is sorted by catalog number. In time I will complete all galaxies here, except for the ones that are showing Arp features too. These are M32, M49, M51, M60, M66 (and Leo Triplet), M77, M82, M87, M90 and M101 and will be shown in the special Arp section. M84 and M86 are shown in the section “Markarian’s Chain” and there’s a special topic for M31 in “Light polluted M31“.

M59 is an elliptical galaxy with a somewhat oval shape. The distinct core is surrounded by a large, bright and soft glow that fades smoothly into the sky background. No further details could be seen. Nearby is the smaller and dimmer galaxy IC 3672. Sketched with the 16″ Alkaid @259x. 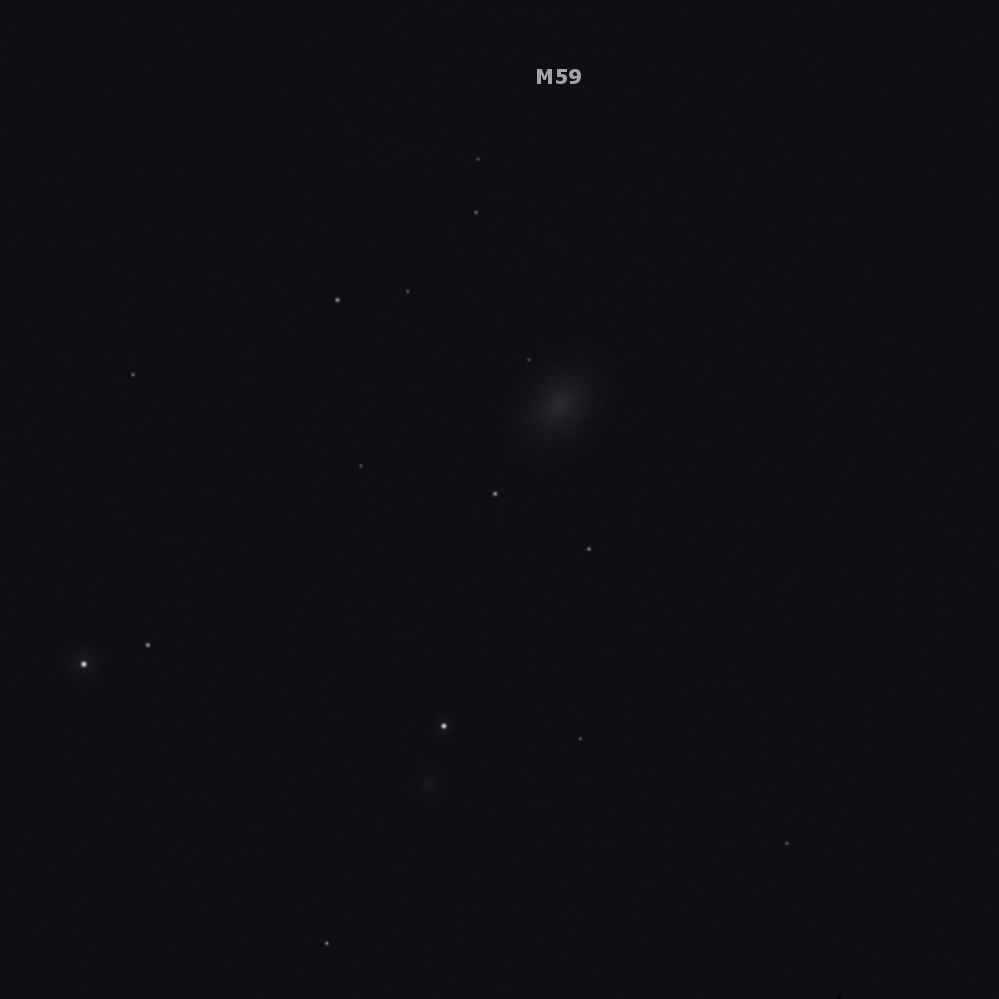 M61 is the only sketch that I did from the Col du Calibier during spring break on the only cloudless night. It was easy to discern at least two spiral arms, of which one was rather “hooked” instead of circular. The one on the W-side is weaker, broader and extends far away from the center. The core is very bright, almost stellar and the whole picture reminds me of the small letter “a”. Two companions were seen as well; these are NGC 4292 and NGC 4301. Sketched with the 16″ Alkaid @181x. M63 is large and bright. Not face-on, not edge-on but it appears right in between. The core is a glowing sphere, but right in the center a stellar core is noted. It is so small that it could almost be mistaken with a foreground star. On the up and right the edge is more defined, often a telltale of a dustlane, but I could not see that. In other areas the glow dissipates softly into the background. Across the surface a lot of mottling can be seen; bright flakes and dark lanes are hard to hold onto and the spiral structure is very difficult, but on the top and left side I do see a curl in the nebulosity and a weaker and shorter one on the opposite side as well. Additionally, a dark lane can be seen right under the core, moving away to the right. The Sunflower Galaxy turns out to be a real beauty! Sketched with the 16″ Alkaid @259x. 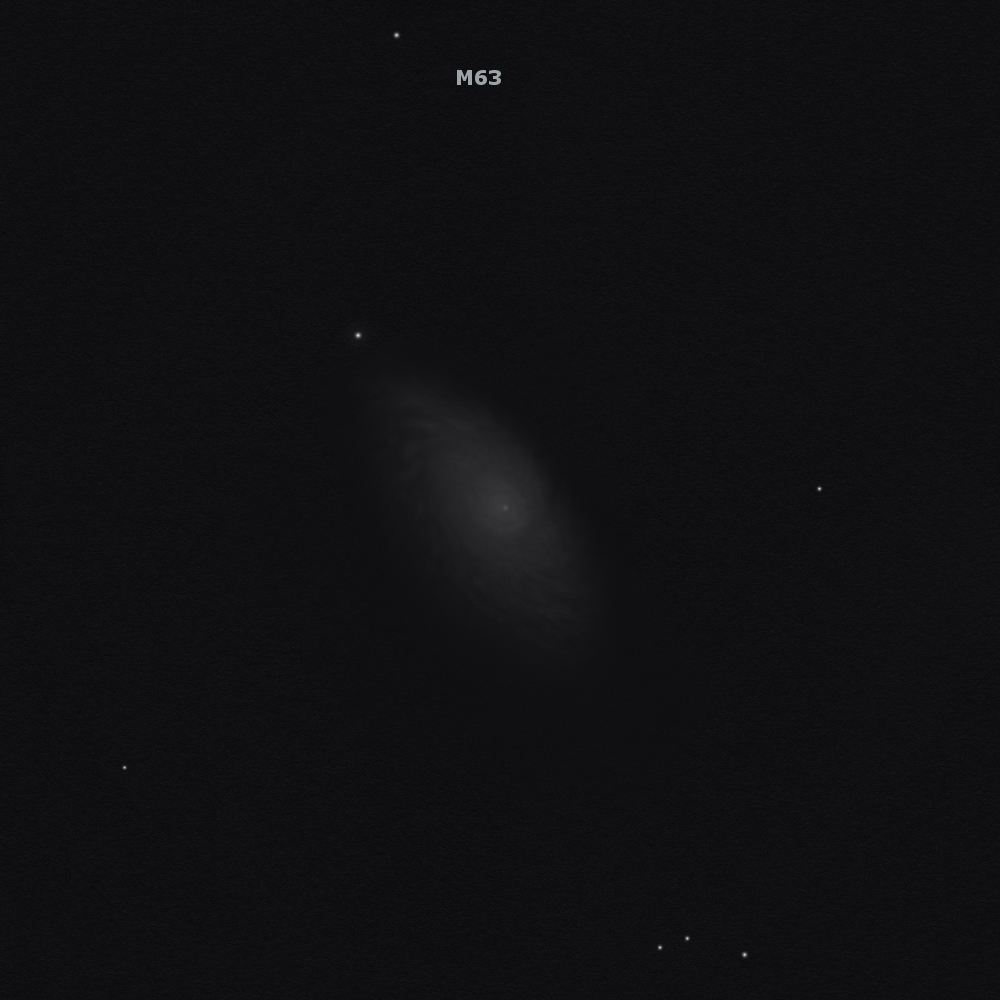 I have observed M64 (the Black Eye Galaxy) many times before and decided to go for a sketch in 2020 when I (finally) got a very good view of it. While focusing on the eastern arm (right in the sketch), it was the arm on the west side that struck me first and I did not expect that. It can be seen on the SW side, a bit detached from the galaxy and quite dim. The E arm took more effort and although I am sure to have seen something, the views were too fleeting to be completely accurate. I think I saw it on the NE side, a bit closer to the core but I’m not 100% sure. The dark band under the pearly core is something else. It could be seen right away, quite thick and not symmetrical as it’s more prominent on the E side and moves up in a sharp bend. Under the dark band a bright line is visible of which I had the feeling that it was sparkling from time to time (like a necklace). Other than this, I could see no spiral structure. It’s mainly a large and bright (rugby ball shaped) glow that softly dissipates into the sky background. It’s the core area that makes this galaxy worth a visit year after year. Sketched with the 16″ Alkaid @259x. 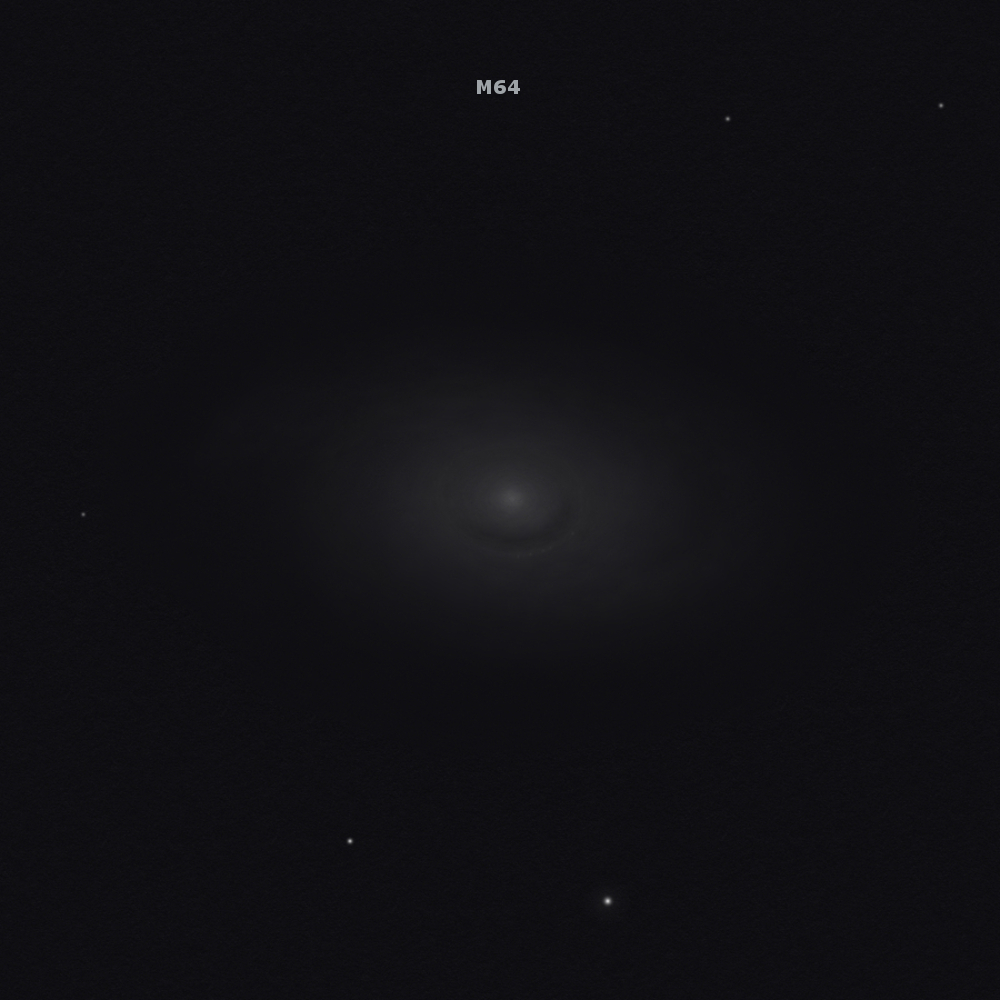 M65 is a thick edge-on that fills a good part of the field in the 7mm. The S-side (left) is a bit fuller and brighter, especially along the E rim. The core is stellar, with around it a bright and oval glow. Against the galaxy, a foreground star can be seen and on the N-side of the extension a knot can just be glimpsed. The W-side is sharper defined, which indicates a possible dust lane, but I can’t see the lane as such. Sketched with the 16″ Alkaid @259x. 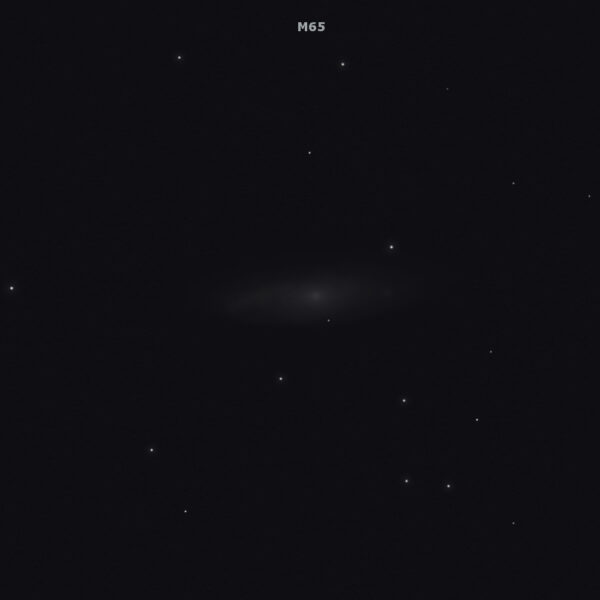 M81; Bode’s Galaxy is a grand design galaxy in Ursa Major. Much larger than its cosmic neighbor M82, very bright but with spiral arms that can be hard to discern. The south arm (up in the sketch) was a bit easier, because it’s betrayed by a brighter part on the left where it makes its bend. This arm is a bit brighter and thicker than the opposite one, which was hard to distinguish even with averted vision. I had to restrain myself from drawing the arms too apparent to keep the end result as realistic as possible. But even now, the arms appear brighter than I have actually seen them. Furthermore, I noticed a dark lane just under the bright core. Not sure if it’s real or just my imagination, but it kept popping up. Sketched with the 16″ Alkaid @129x. 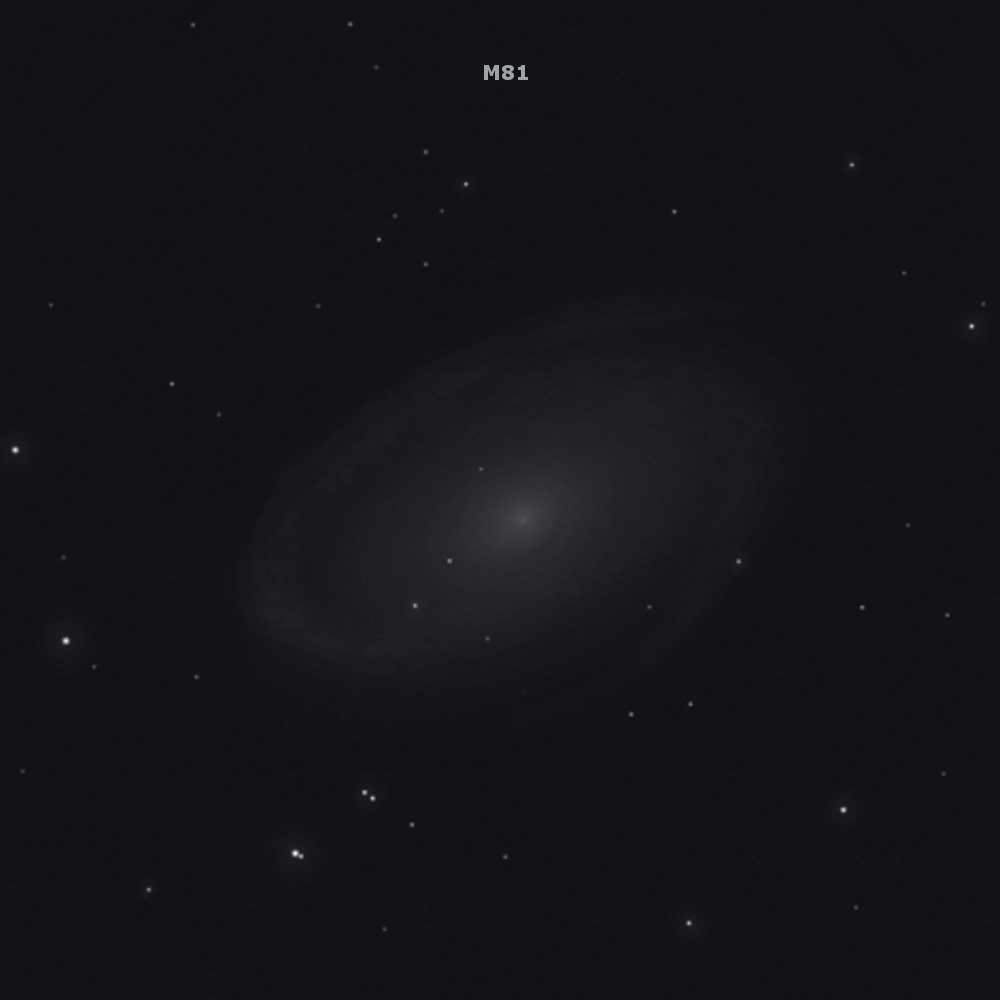 M85 is very bright, with a bright and compact core that slowly fades towards the edge. The galaxy is somewhat oval shaped, but appears round at first glance. The only detail is a foreground star just within the glow and nearby galaxy NGC 4394. Sketched with the 10″ Alkaid @171x. 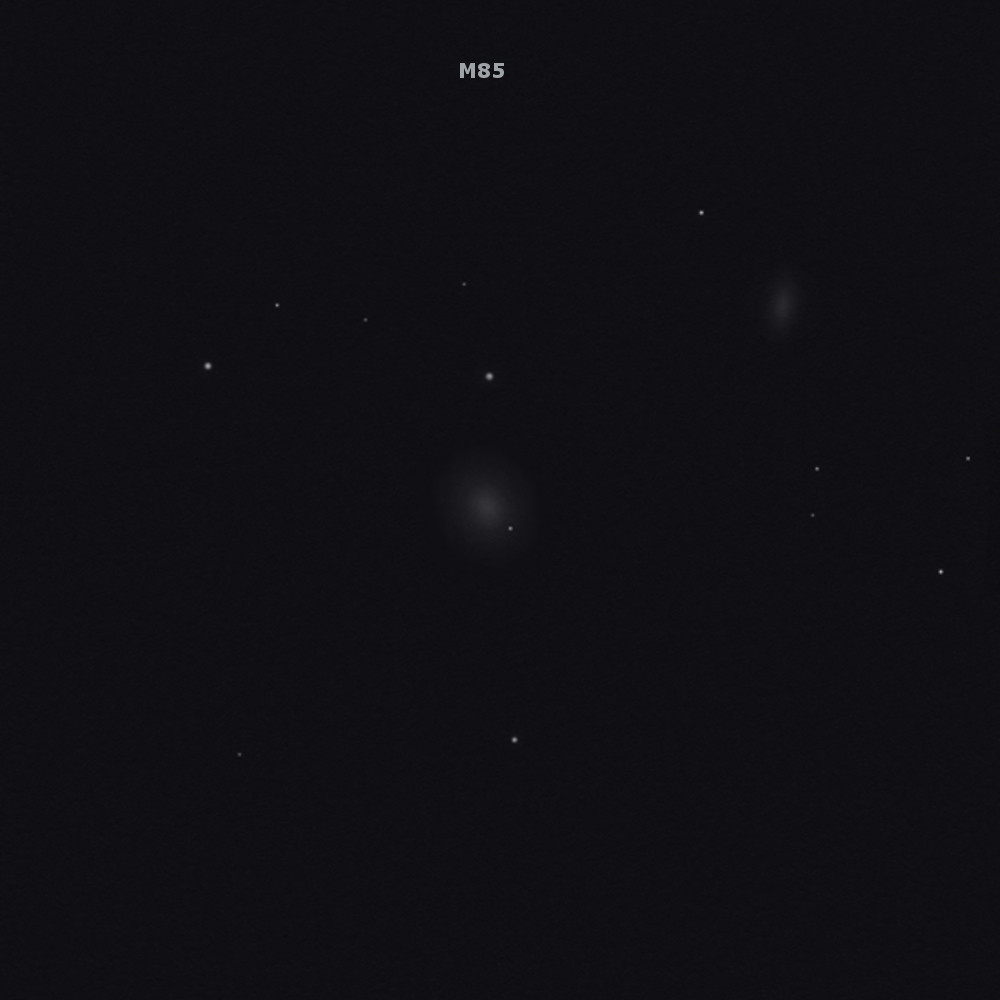 M89 is not much more than a bright and almost round fuzz of which the brightness evenly dissipates towards the edge. It’s a typical elliptical galaxy without any further detail. Sketched with the 16″ Alkaid @259x. 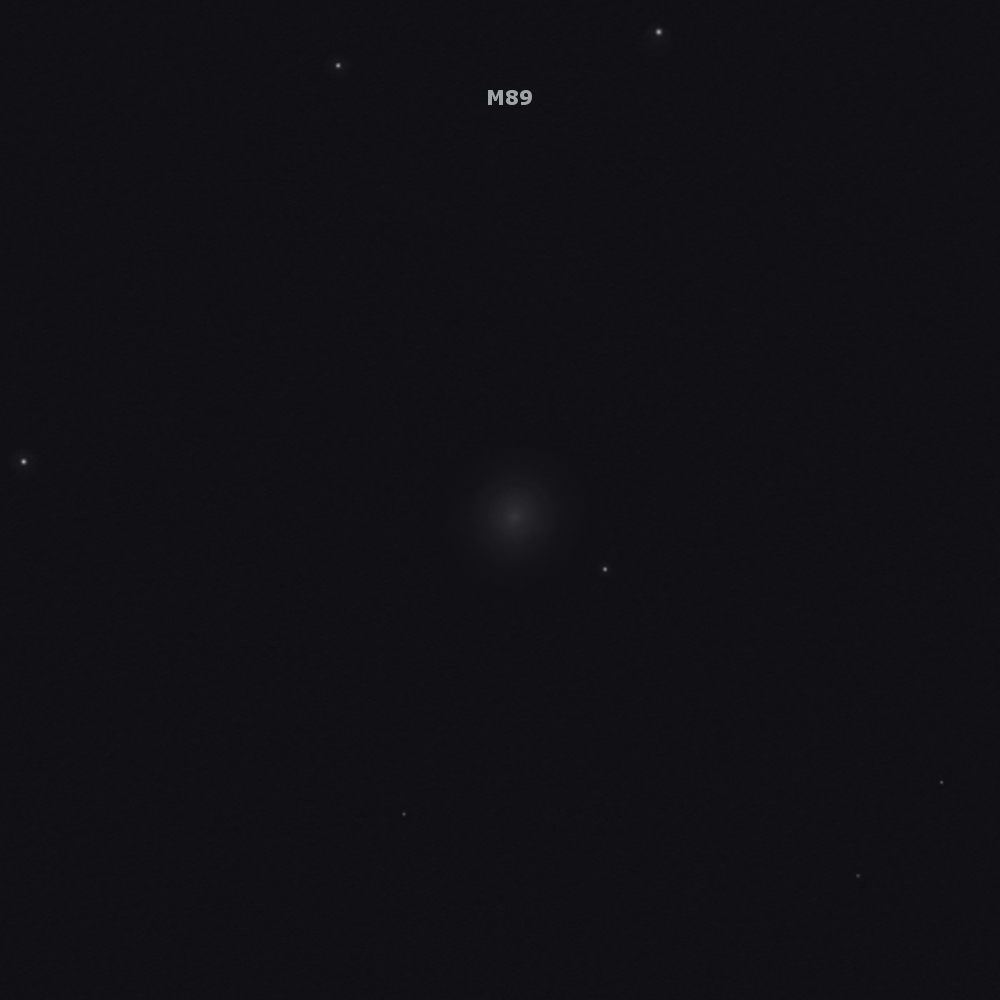 M94 is very bright. Mainly the 1/3 core, but also the halo which appears woolly and shows a cobweb of spiral arm structure, or at least a hint of it. It makes me think of crop circles. On the right side the halo is a bit more defined and angular. I can’t see the second and much dimmer halo. Sketched with the 16″ Alkaid @259x. 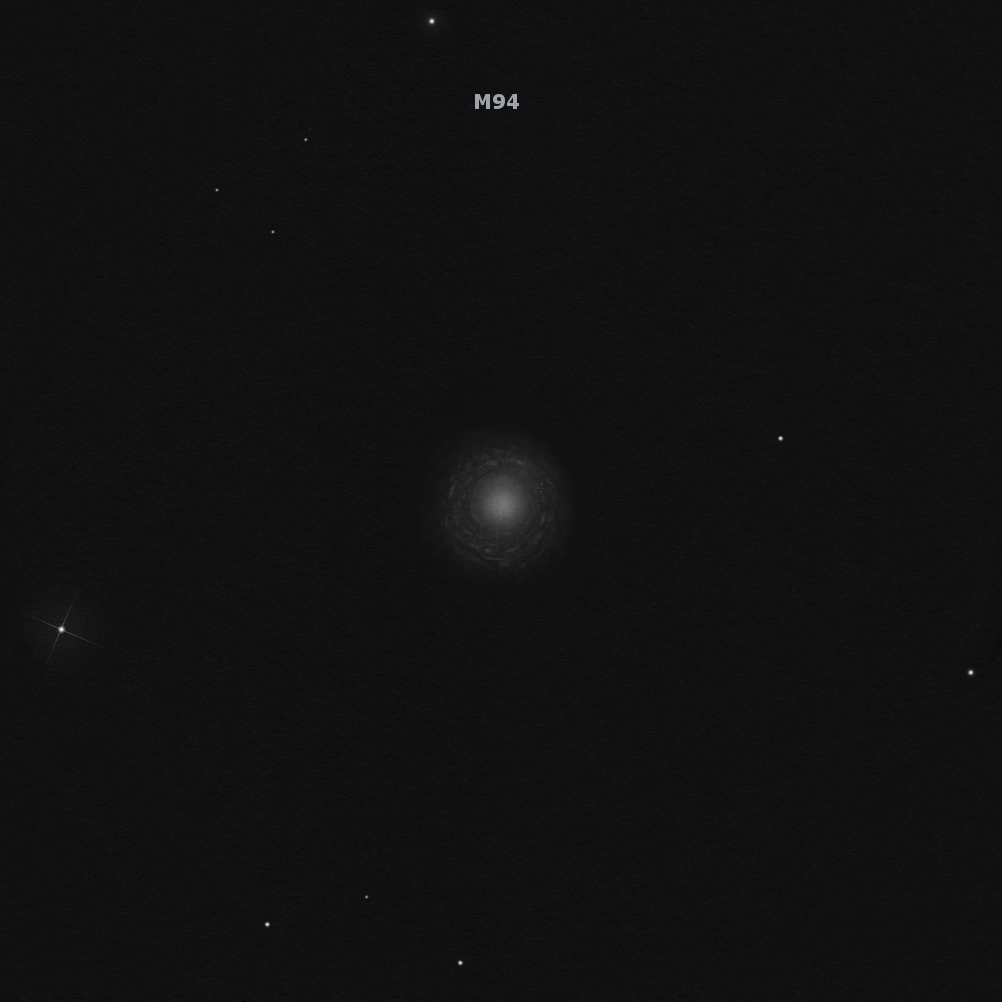 M95 is a round face-on with a very bright and oval (non stellar) core. With AV the bar (and direction of it) is seen as well as two spiral arms that almost make a full circle. Only on the W side (above and left) they are not completely closed). The outer parts of the galaxy were not seen. Sketched with the 16″ Alkaid @181x 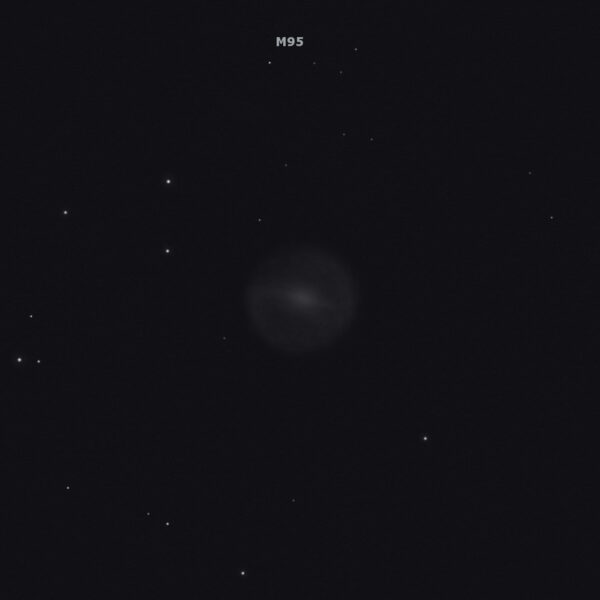 M96 is close to the previous one and a bit of a disappointment compared to it. It takes some more effort to extract the details from it. I do see two arms, of which one stretches out a bit further and in the center lies a bright core, but the object doesn’t really “pop”. Sketched with the 16″ Alkaid @259x. M98 has a long cigar shape and is a bit dimmer than I expected (or hoped). There are no eye-catching details at first sight, but the longer I look the more I start noticing. That the shape is slightly curved (like a saucer) for example and that the right side appears a bit brighter. A patch of nebulosity can be spotted in this side of the extension while on the left side, just above the compact core, the start of a spiral arm can be glimpsed. Only at the end of this extension the nebulosity is once again a bit brighter, but I can’t see the complete arm. Sketched with the 16″ Canopus @258x. 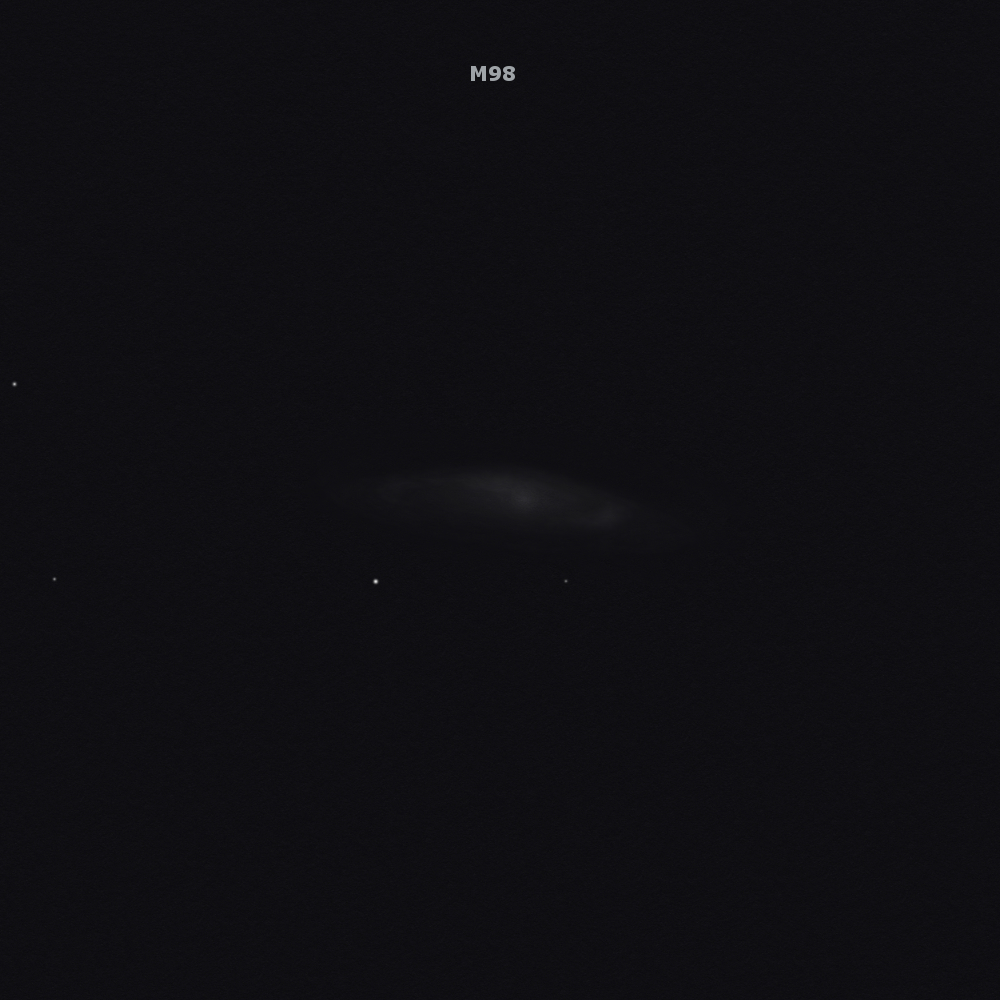 M99 is a face-on galaxy with at least one visible arm (up in the sketch) and a core that appears to consist of two parts. The second and third arm, of which I know they are there, are unclear. I think I see them together as one nebulous area with a curl in it. Sketched with the 16″ Alkaid @259x. 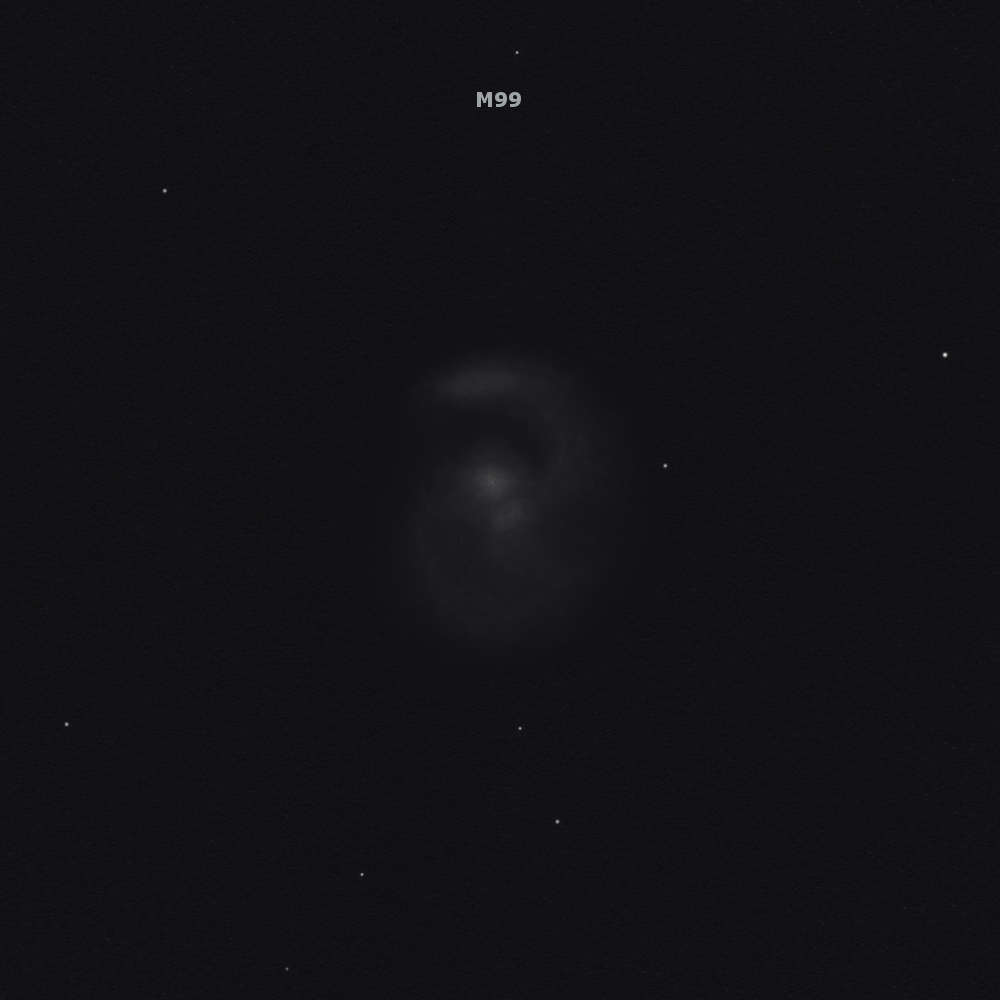 M102 (NGC 5866) is a bright edge-on nicknamed the “Spindle Galaxy”. My hopes were up for spotting the tiny dustlane that crosses the face of this fine looking galaxy. At lower magnification it did not present itself, but with the 5mm eyepiece at 370x I could definitely confirm it. With the 3.5mm at 518x it was even more easy to see it, but the overall view softened a bit too much. The first thing I always do when starting a sketch is plotting the star field and I was surprised to see a very dim star at the tip of the NW side of the galaxy (down in the sketch). On the opposite side (SE) near the core I may have spotted a slightly brighter patch. I added it to the sketch, but I’m not sure if it’s real or if it was merely an illusion. Sketched with the 16″ Alkaid @259x. M104 give a first impression of a very bright needle with a compact core. On top of it is, without a doubt, a very apparent dustlane like a black streak. Above the “saucer” is a dim, but clear “roof”. This galaxy looks a lot like the famous Needle Galaxy (NGC 4565), but it’s rounder and shorter. A true showpiece, this Sombrero. Sketched with the 16″ Alkaid @259x. 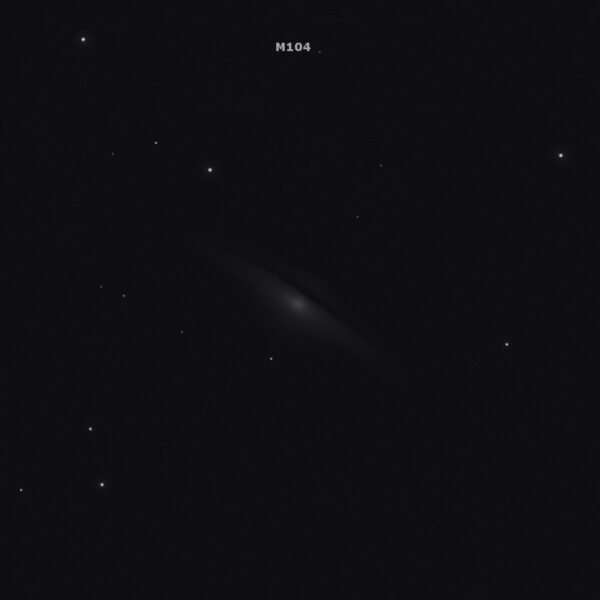 M105 and NGC 3384 form a lovely couple and they actually turned out to be a triple! However, NGC 3389 is very dim and seemed more like a vague reflection of the other two galaxies… NGC 3384 is nearly as big and bright as M105, though it has a more oval shape and the core was a tad smaller. No additional details could be seen. Sketched with the 10″ Alkaid @ 120x. 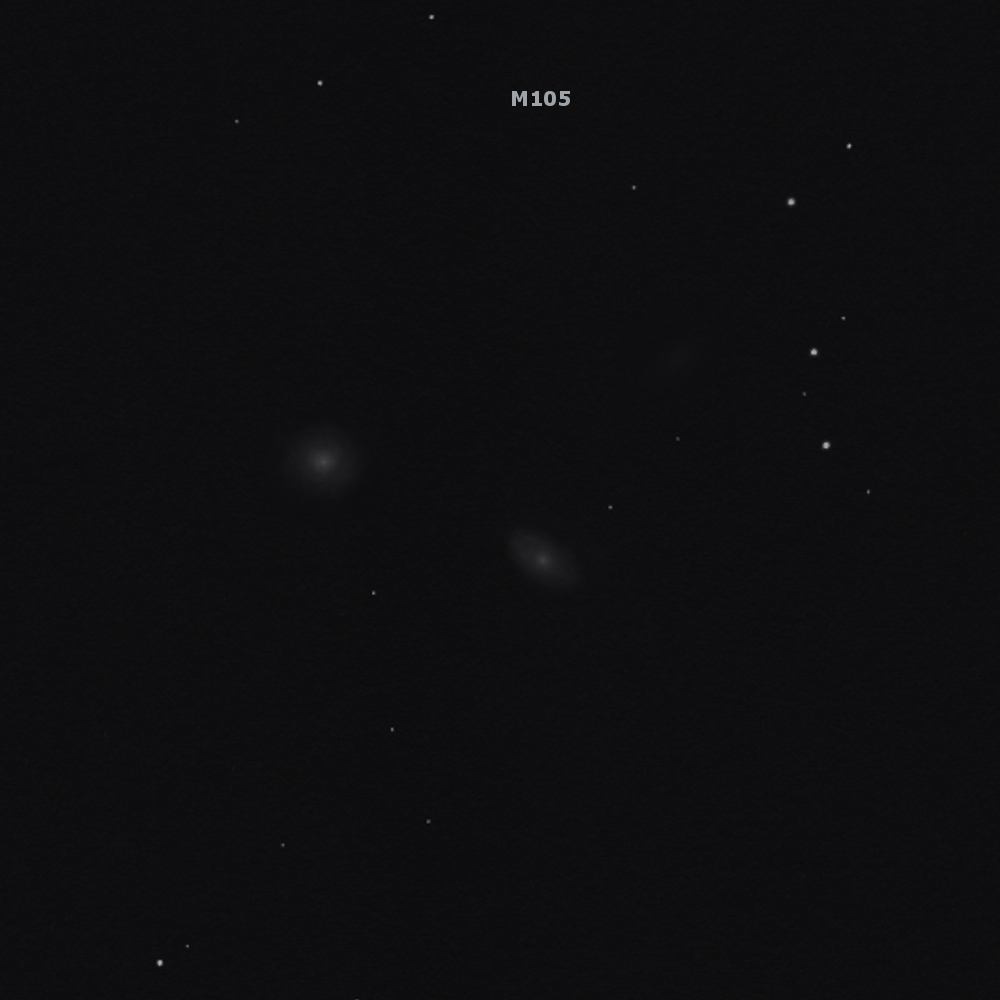 M106, like a thick cigar, is big and bright with a very distinct small core in the shape of a short bar. One thick spiral arm could be detected fairly easy. The galaxy is oriented N-S between two somewhat brighter stars and with averted vision it felt like these were just in reach of the arms. An accompanying galaxy can just be seen in the top left of the sketch. Sketched with the 16″ Alkaid @181x. 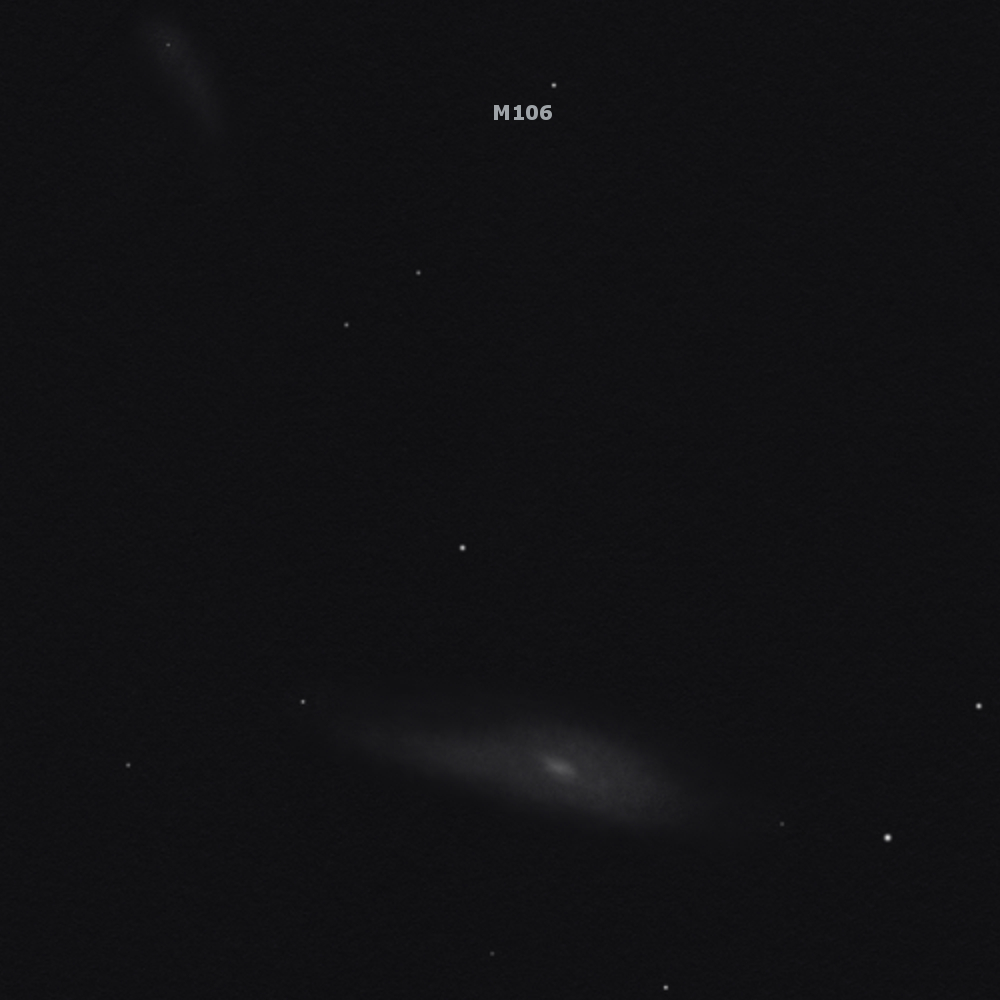 M108 is somewhat dim for Messier object, but this is compensated by the richness of features that can be seen under a dark sky. The seeing was good enough to permit a high magnification and although the galaxy almost became translucent now, it helped to filter out some of the details and that was precisely my goal with this sketch. Instead of one (bright!) star, I could now see two more inside the boundaries of the galaxy. Also, some patches of nebulosity became visible, particularly left of the core. At the left tip another patch is separated from the “surfboard” and it appears as a curl. The right side of the core is less bright; there’s a “C” shaped darkening directly next to it and the tip ends more bluntly into the sky background. Sketched with the 16″ Alkaid @ 370x M110, the famous neighbor of M31 is huge! Even in the 20mm EP it fills a large part of the field, most certainly with averted vision. I can’t discern any detail, but I do see many foreground stars in and just outside of the glow. The large elliptical galaxy perfectly fades out into the sky background and only in the center an elongated brightening can be seen, with in the heart a stellar-like nucleus. Sketched with the 16″ Alkaid @91x. 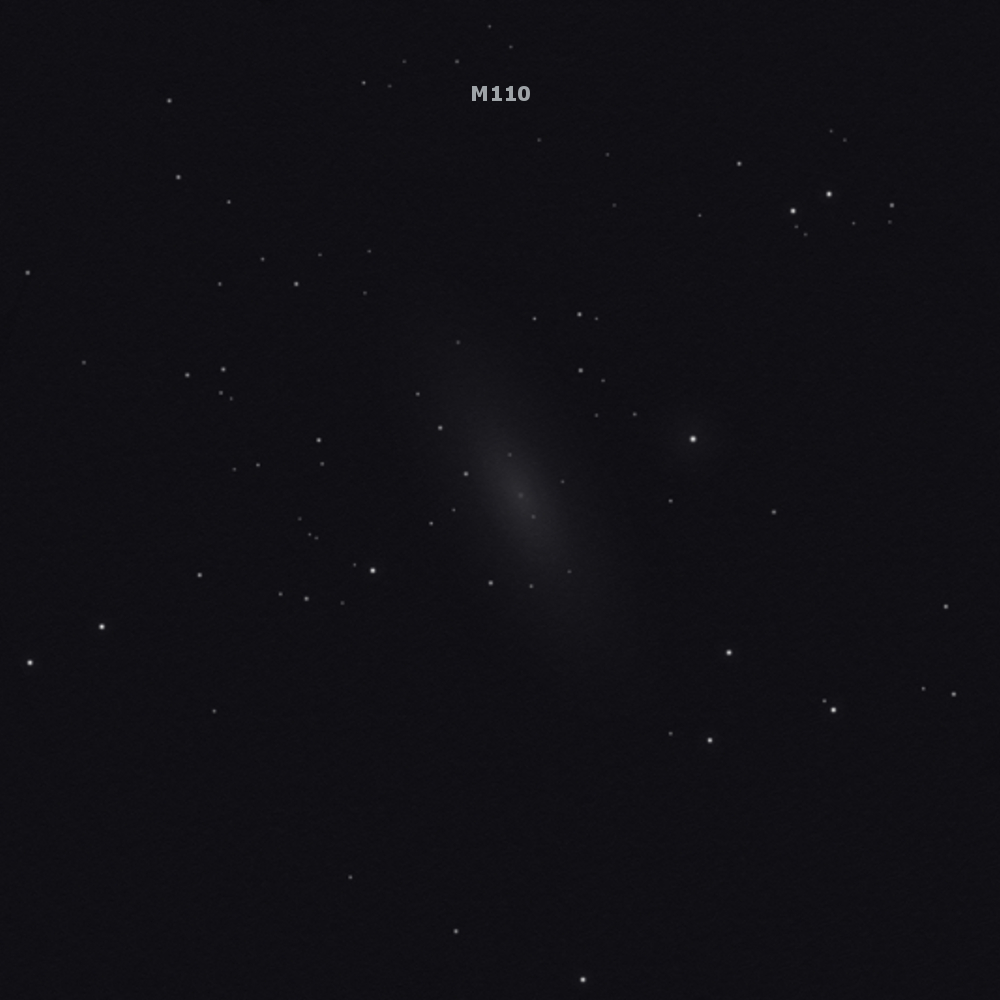