The Caldwell list offers a total of 13 fine planetary nebulae and most of them can be seen well from the northern hemisphere. A wealth of detail and structure become visible, especially on nights with good seeing when magnification can be cranked up.

NCG 40 (C2), the “Bowtie Nebula“, is the most northern one and it’s characteristic for its opposing, somewhat brighter arcs that appear a bit angular. The central star can be seen well, surrounded by a darker area. a loose “tuft” can be seen on one tip. Sketched with the 16″ Alkaid @362x. 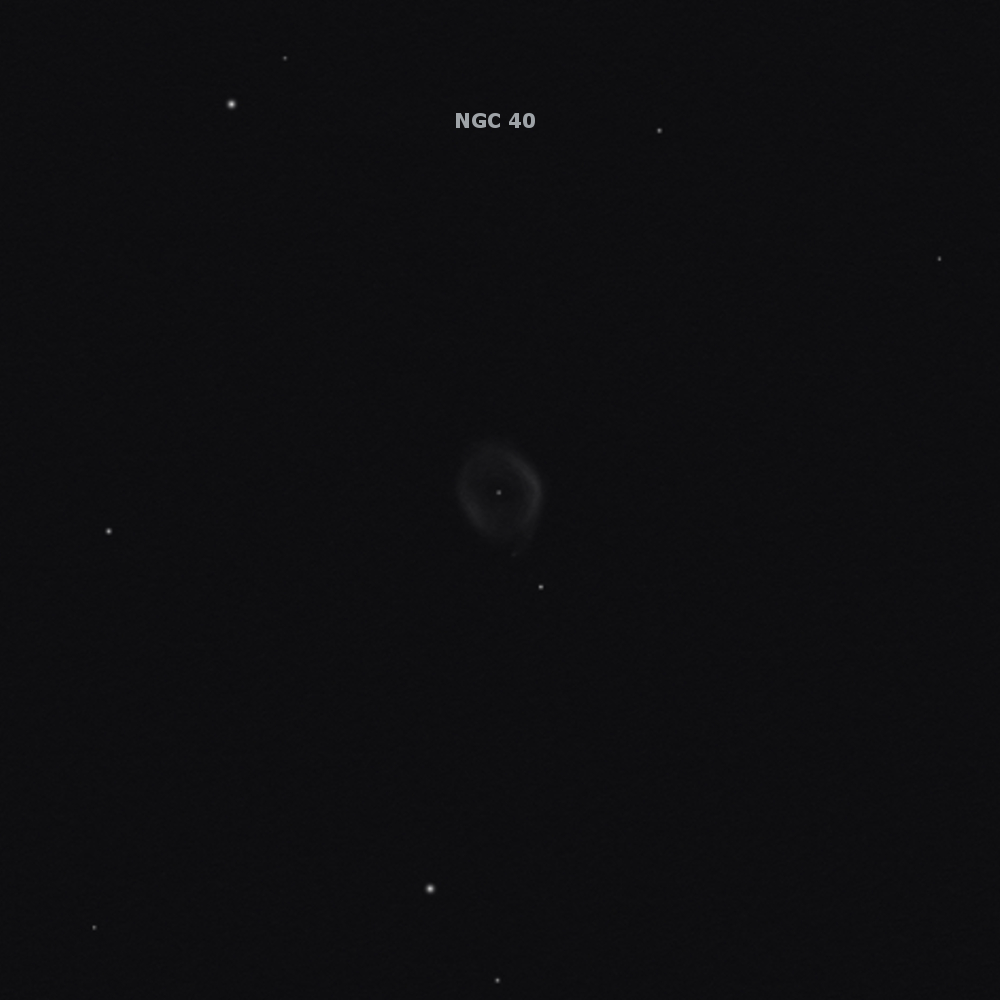 NGC 6543 (C6), the “Cat’s Eye Nebula” is a beautiful object, very bright and even with high magnification the blue color remains visible. the central star is very prominent and shines brightly in the oval shaped nebula. With AV the nebula has a more rhomboid shape. Some structure can be seen in the nebulosity and around the central star a darker cavity is seen, although it’s difficult to estimate how large it is. An easier feature is the curl on the right side, or actually it’s more like a dark intrusion. The outer shell of the nebula can’t be seen, except for one small comet-shaped part: IC 4677 (up in the sketch). Sketched with the 16″ Alkaid @362x. 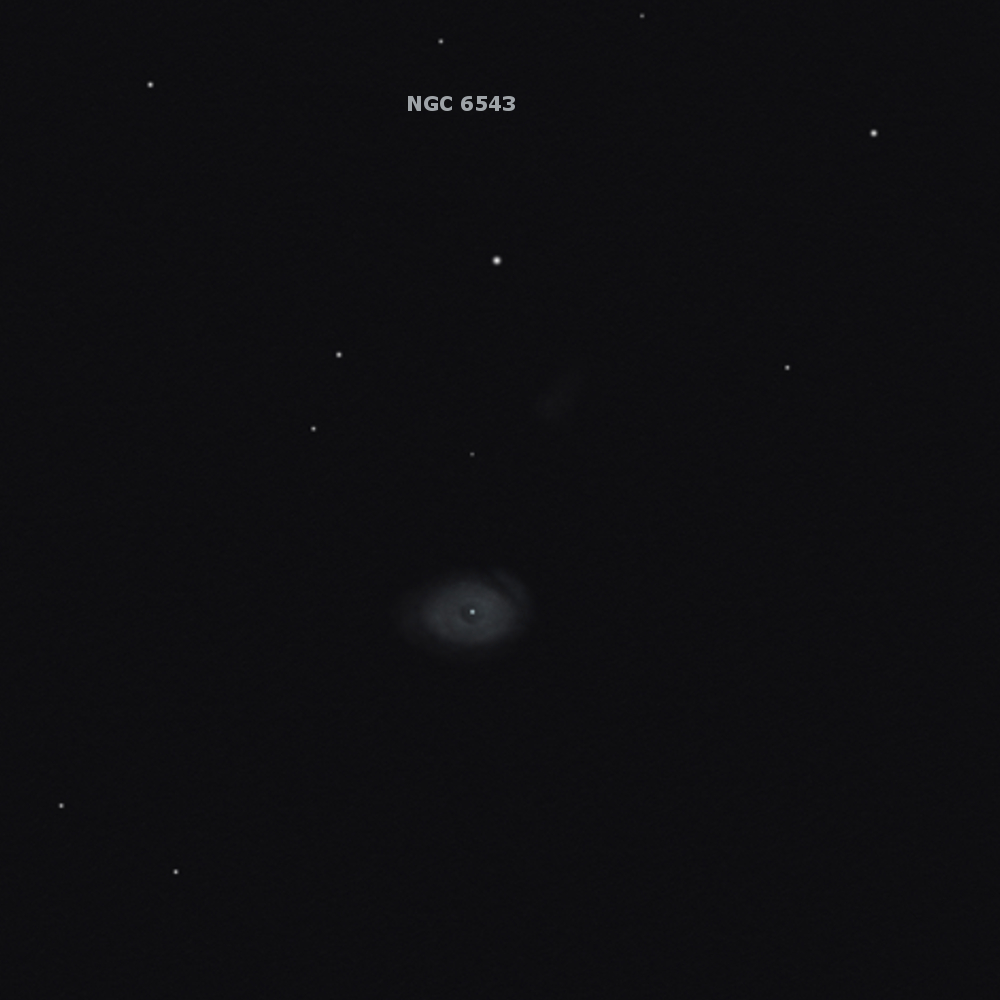 NGC 7662 (C22), the famous “Blue Snowball” is a fine autumn planetary. Increasing magnification on this nebula helps to see some interesting details; an inner bright ring in the shape of a horseshoe, a soft outer halo and of course the color blue. Things really started to get blurry at this power, but the nebula took it quite well and the view was still nice. The central star was not seen, however. Sketched with the 16″ Alkaid @518x. 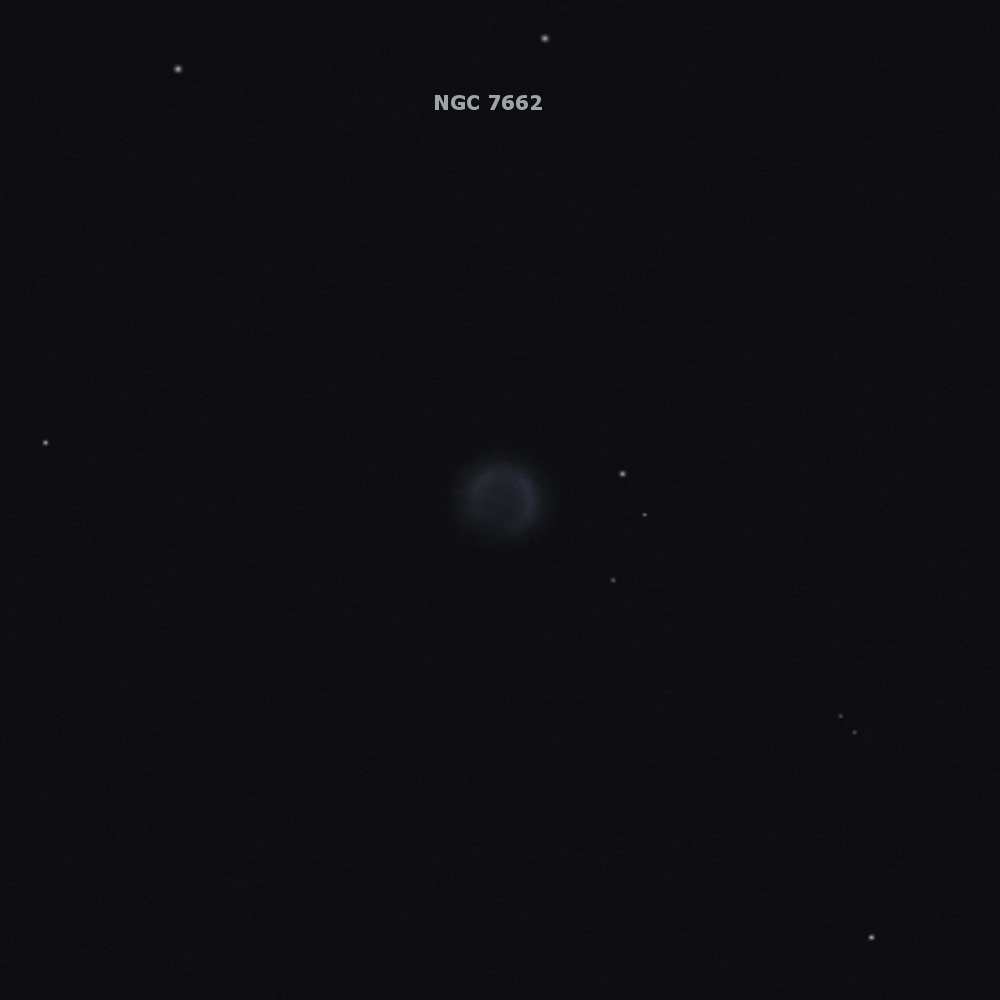 One of the most famous winter planetaries must be NGC 2392 (C39), or the “Eskimo Nebula“. At low power it’s very bright, round and fluffy, but it takes magnification well and then some more interesting details become visible. The central star is easy and around it an uneven dark cavity and a double shell can be seen, showing the well known and structured “fur collar”. The face of the Eskimo was not seen however. A very bright star is close by. Sketched with the 16″ Alkaid @259x. 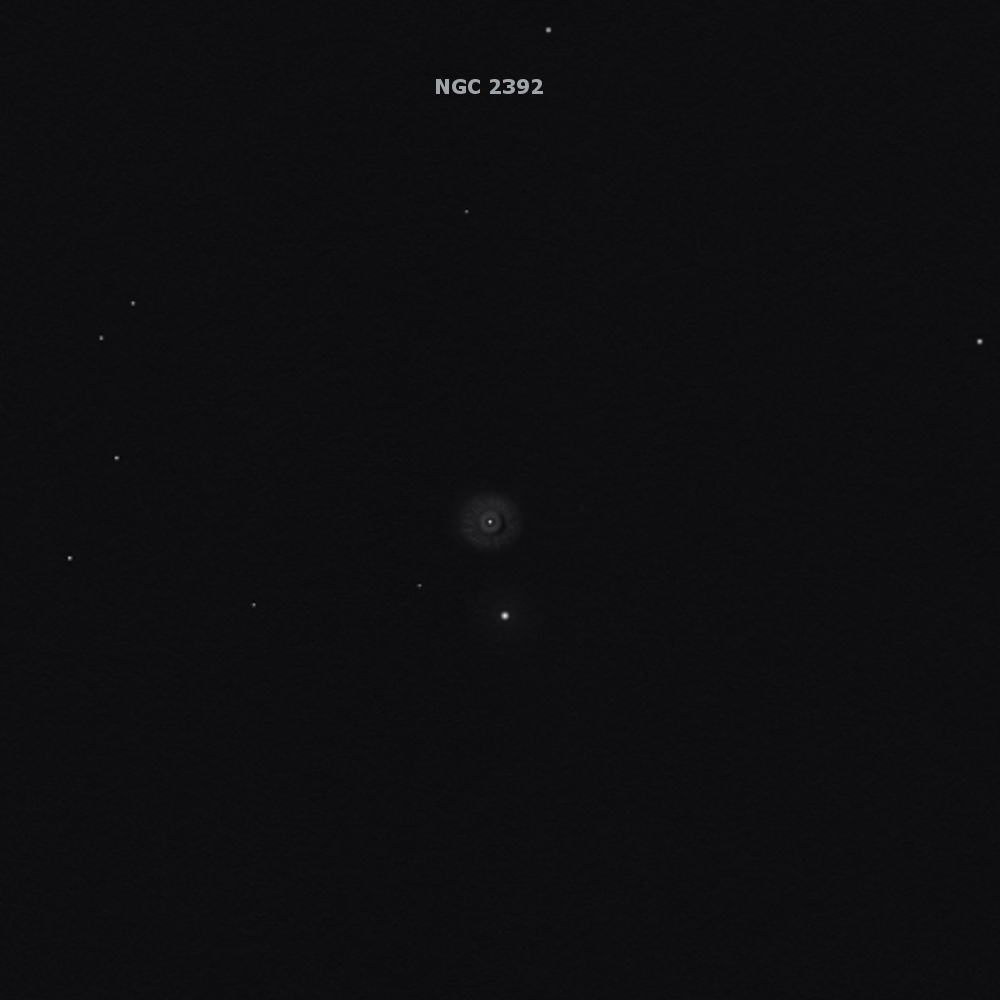 NGC 246 (C56), aka the “Skull Nebula” was observed on La Palma under good conditions. This is a large nebula and it appears almost circular and ring shaped with an opening in the SE part (up and right in the sketch). An OIII filter boosts the contrast and the brighter parts of the ring are now easily seen; the W one is the brightest and wavy, while the N and S parts are broader and less defined. Two bright stars can be seen in the center, while another on is just outside of the nebula on the NW side. Indeed the whole shows a face-like appearance. Sketched with the 16″ Alkaid @181x 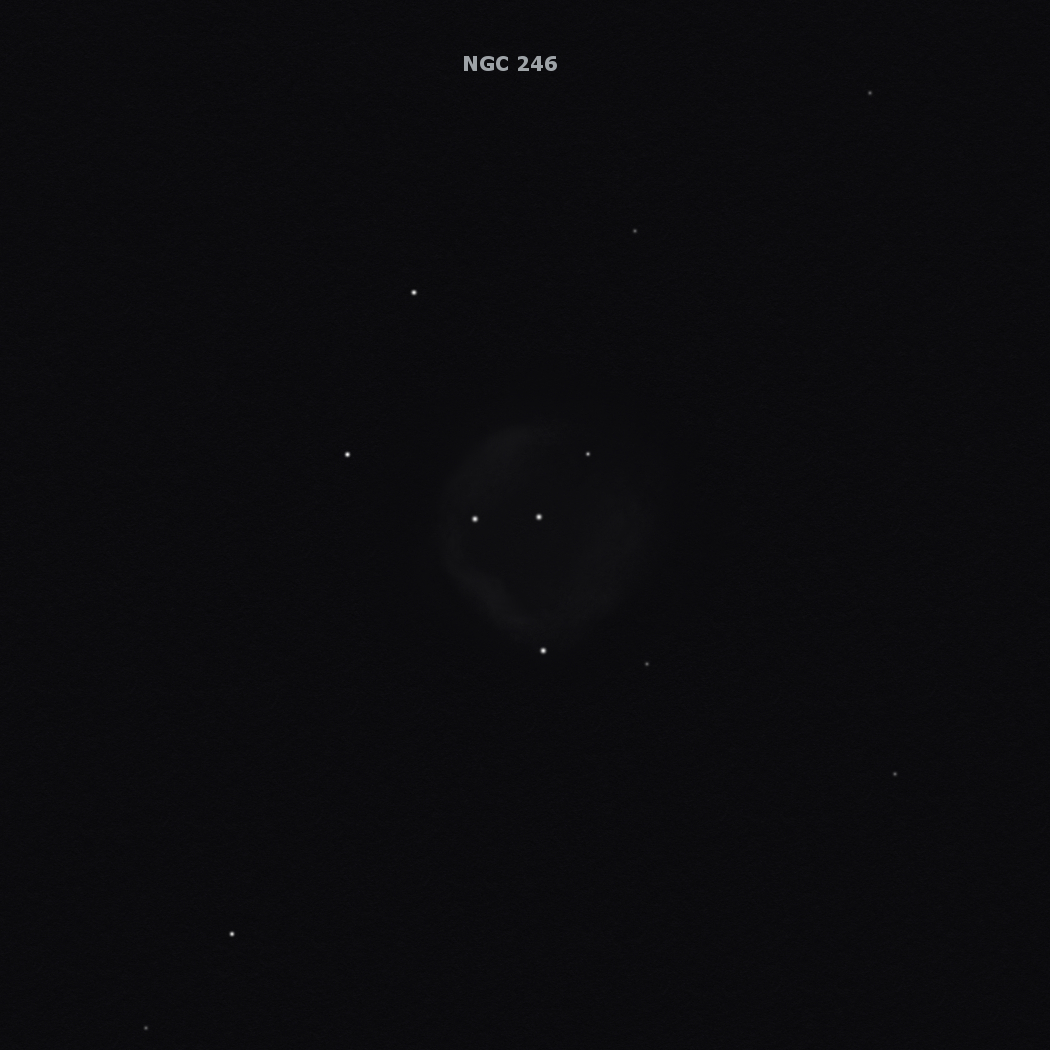 NGC 3242 (C59) was a real showpiece when viewed with (only) 10″ from La Palma with superb seeing. The “Ghost of Jupiter” is razor sharp, very bright, slightly oval and consists of two rings. The inner ring is the brightest and sharply defined and two “tufts” at the end are a bit brighter. The outer ring is a bit rounder and much softer. The color of the nebula is a definite light-blue and the central star can just be glimpsed. Sketched with the 10″ Alkaid @240x 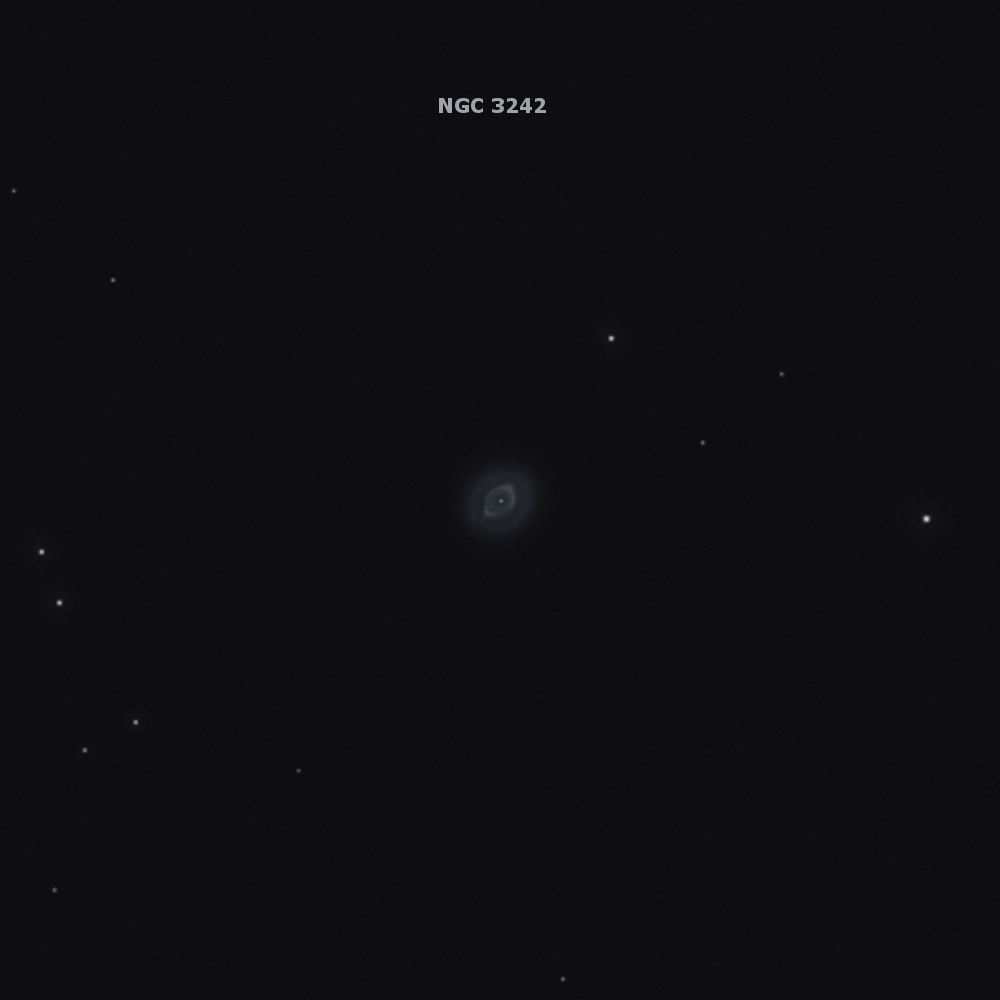 NGC 7293 (C63), the “Helix Nebula” is extremely large and appears as a ring that is almost round. The inner part is nebulous as well and some dim stars can be seen in the front. Left and under (NW) in the nebula is an opening where the ring is not completely closed. Two streamers can be seen there (one somewhat brighter). At the opposite side (SE) the rim is a bit softer defined. At S a brighter area is noted, while at the N side there are two, one of which has a “wavy” shape. An indentation in the ring at that part is observed. Beautiful object. 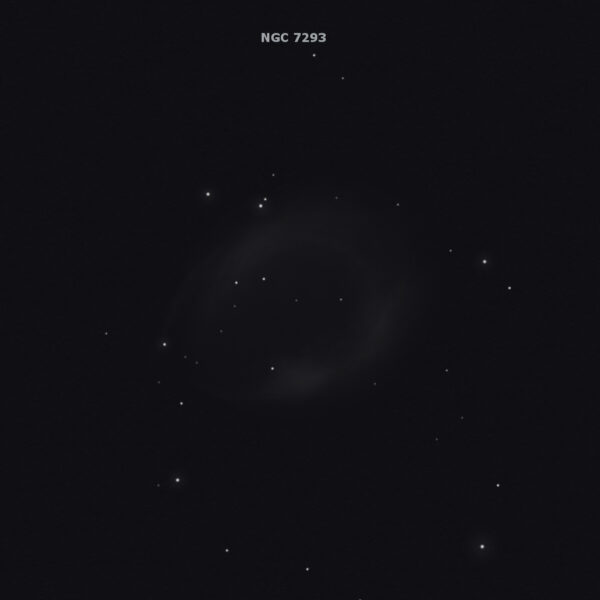 NGC 6302 (C69) is special and unique in its kind. The “Bug Nebula” is large, stretched and seems to consist of two parts; the left half of the “body” is separated by a dark intrusion from the main part. The brightest area is right of the center and from there it’s easy to see two “tentacles” moving away right and up, the lower one being the largest, longest and brightest. With some effort another tentacle can be seen going down from the middle of the nebula. This one is quite short. The left and longest tentacle was only seen later on when it kept presenting itself on and off with AV and appeared very long and thin. Indeed this object has the appearance of an insect. Very handsome! Sketched with a 16″ Dieter Martini @362x 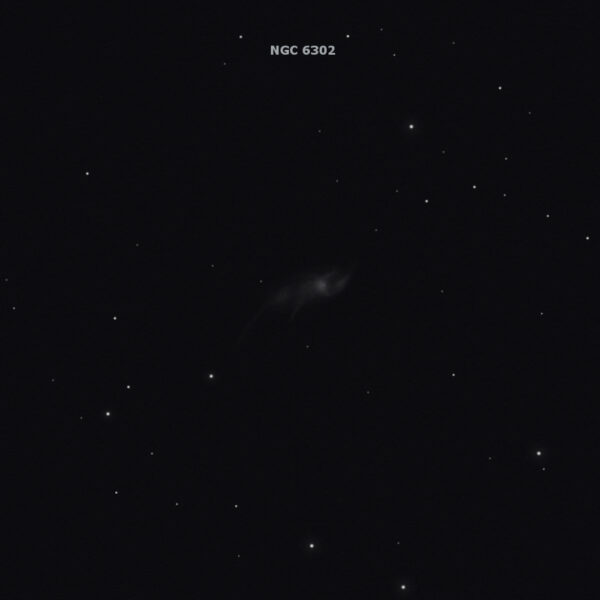 The ring shape of NGC 3132 (C74), the “Eight-Burst Nubula” or (better yet) “Southern Ring” is not immediately clear; the center part is nearly as bright, but after longer observation the annulus shape becomes more prominent. The ring is somewhat oval and “hooked”. This because the upper- and underside are a flattened. On both these sides a brighter area is noted, the top one more clearly. The left side of the nebula is softer defined and less bright, which gives the impression of a horseshoe. The central star is very bright and clearly there. Just left and right of the star a darker area is noted, the left pocket a bit larger. 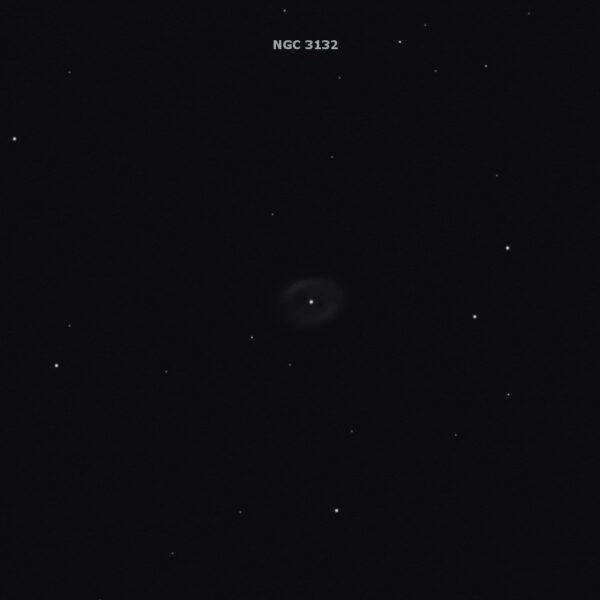 NGC 2867 (C90) is a small and extremely bright nebula. It appears slightly blue and is ever so slightly oblong. The ring (or rather donut) shape is difficult to see as the heart is nearly as bright as the surrounding glow. No central star was seen. The S-side (up) may have appeared just a bit brighter. A fine nebula with delicate features. 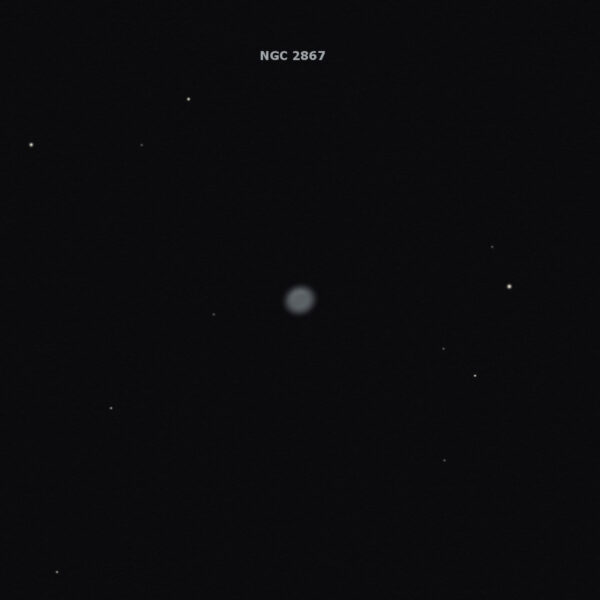 NGC 3195 (C109) is the final object on the Caldwell list and it’s a nice planetary nebula. At first, nothing more is immediately seen than a somewhat oval, bright nebula. But prolonged observation starts to show a dark band, cutting the nebula in two halves. On both sides, two somewhat brighter area’s can be seen just under the center. The resemblance with a coffee bean comes to mind. 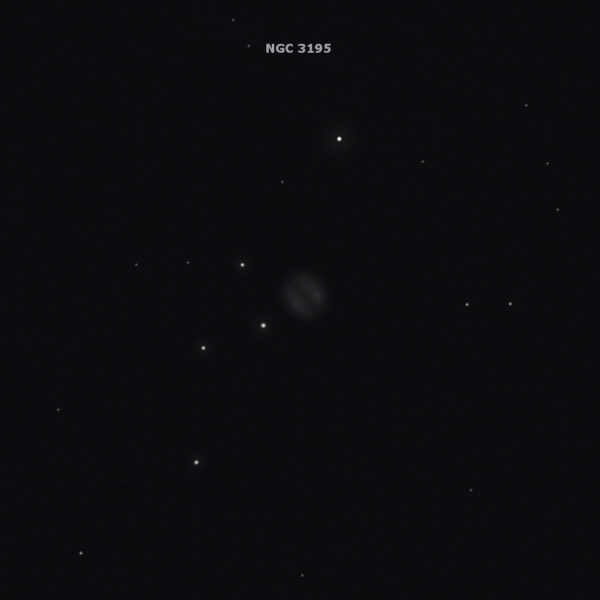