In this section I will go deeper into Caldwell’s famous galaxies and show the drawings in a higher resolution to focus more on the details instead of the eyepiece view. In time I will complete all galaxies, except for the ones that are showing Arp features too. These are NGC 6946, NGC 4627, NGC 4038/39, NGC 1097 and NGC 5128. They are being shown in the special Arp section. NGC 147 and NGC 185 are shown in the section “Two of Andromeda’s satellites“. The sketches are presented in order of northern to southern declination.

NGC 4236 (C3) is a difficult and ghostly galaxy to observe. It’s very big and at first glance has a needle shape, but when observing a bit longer the famous “Hockeystick Galaxy” (NGC 4656/57) comes to mind. That’s because under and left of the extension there is a distinct curl to the left, with a star or small HII area on it. On the other side of the galaxy, all the way up a rectangle-shaped section can be seen loose from the galaxy itself, separated by a dark lane. This gives the galaxy the appearance of an integral sign rather than a needle. The core area is brighter and extended and in the exact middle there is a star (or a very stellar core, but I don’t expect that). What a beautiful sight under a dark sky. Sketched with the 16″ Canopus @129x. 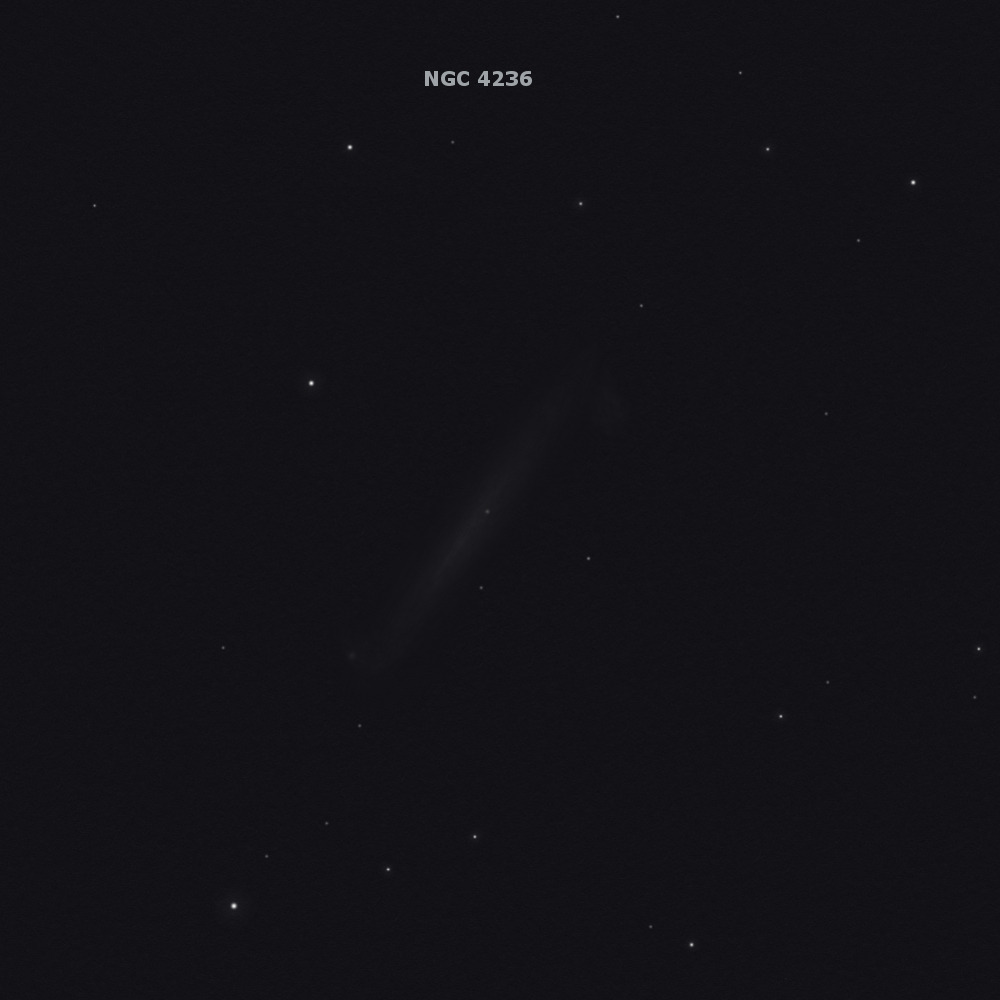 NGC 2403 (C7) is large, with a bright core and it shows spiral structure immediately, but it’s hard to trace the arms. It takes long observing time before it becomes more or less clear how this galaxy is “organized”. It has a mottled appearance and several HII regions can be seen as somewhat brigher knots. The one right and above of the core is the easiest one and even has its own designation: NGC 2404. Two arms can be distinguished with effort, but it’s clear that this is not a “grand design” galaxy. It resembles the appearance of M33, albeit much smaller. Sketched with the 16″ Canopus @181x. 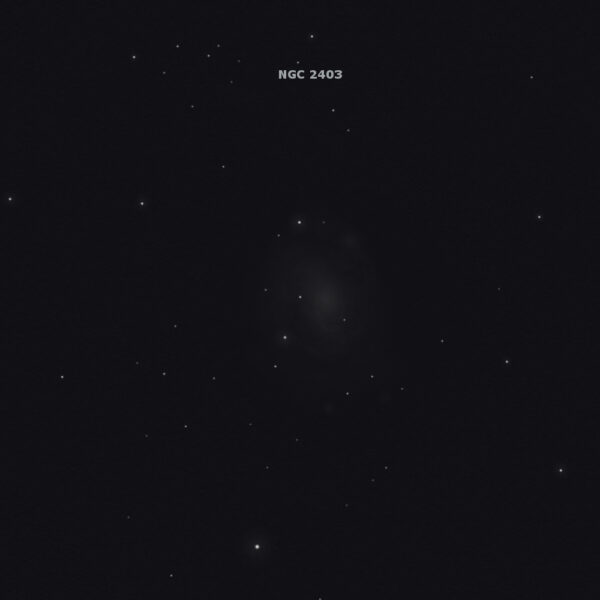 NGC 4449 (C21) aka “The Rectangle” or “Trainwreck Galaxy” is a remarkable starburst galaxy because the shape is clearly different than what we’re used to. Because not all nebulosity is seen, the shape is not really square to me as it shows in photographs. It looks more like a penguin, paper plane or “Johnnie Walker” to me. That’s because, loose from the bright core, there’s a bright patch on the S side (up in the sketch) and there’s a “leg” of nebulosity that leads to a HII knot under and left. Four more of these knots can be seen, all on the N side and I’m sure that I missed a few. A special case, this walking penguin… Sketched with the 16″ Alkaid @362x. 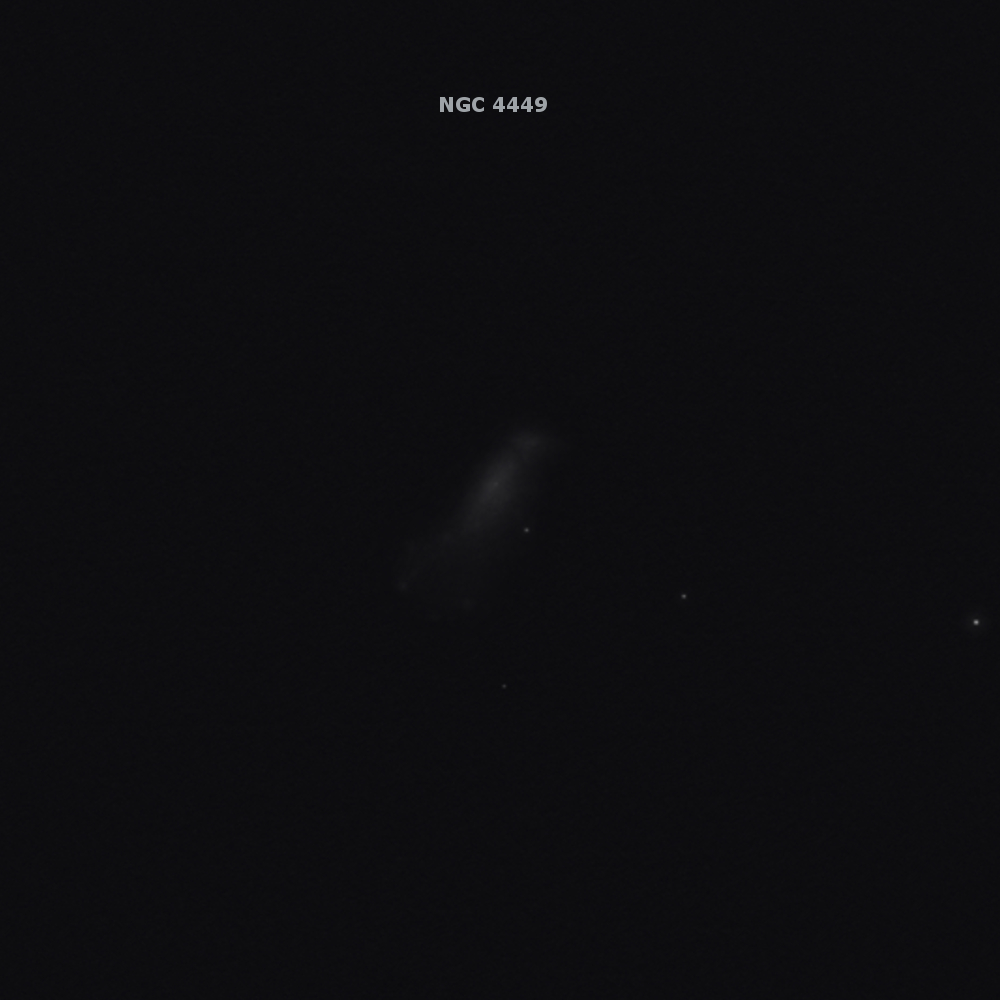 NGC 891 (C23), the “Silver Sliver”, is an edge-on galaxy that most observers know well. It’s pretty large, but also quite pale. Even from a dark site it was less prominent than I expected. Despite that, the outline was clearly visible against the background and the dustlane that crosses the surface was easily noted. Especially the latter is what made it a fine sight. Sketched with the 16″ Alkaid @259x 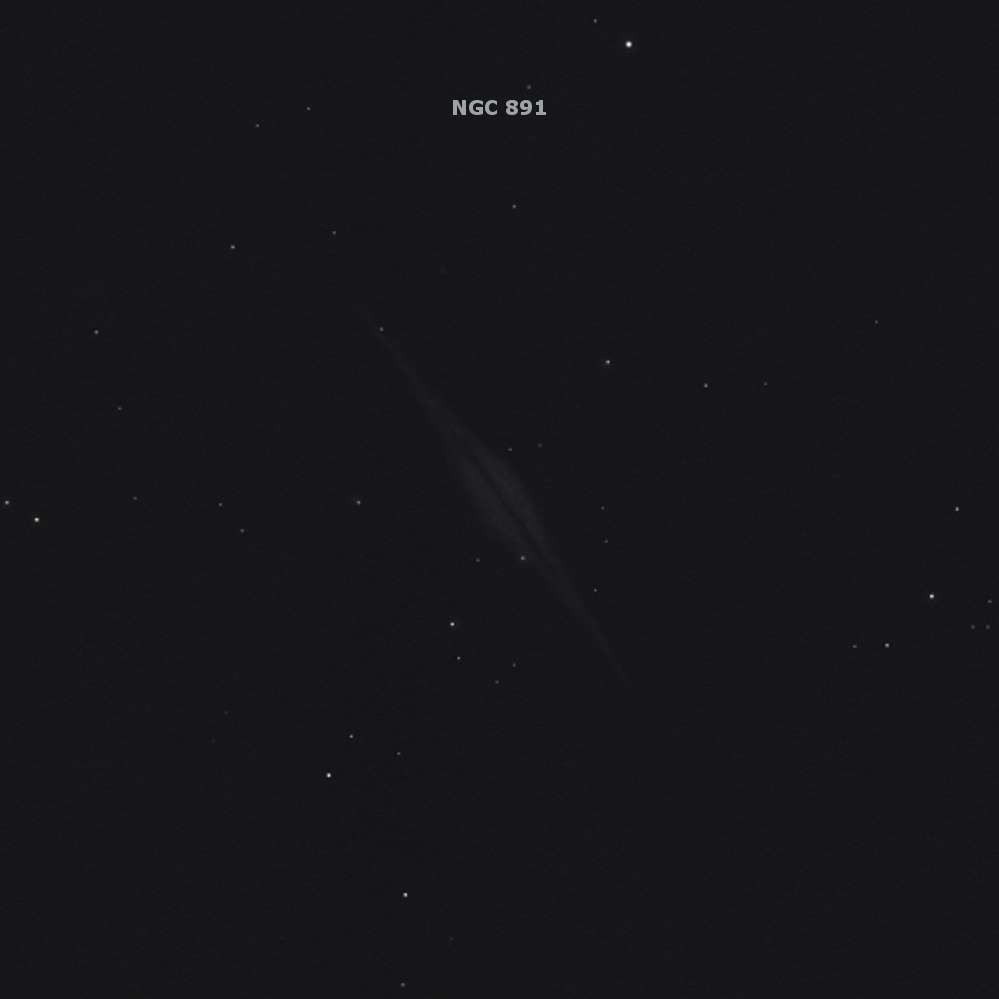 NGC 1275 (C24) or “Perseus A” is the brightest member in a large group of galaxies. It shows a somewhat bright and soft core and its shape is mostly round. Not much detail can be seen, it’s the surrounding field that makes this Seyfert galaxy most interesting. Sketched with the 16″ Alkaid @181x. NGC 4244 (C26) is otherwise known as the “Silver Needle Galaxy”, and what a needle it is! It’s long and thin and hardly without any central “bulge” nor a dustlane to split it in half. The brightness fades ever so delicately from the core to the tips, but is a bit more prominent on the right side of the core. Sketched with the 16″ Alkaid @259x. 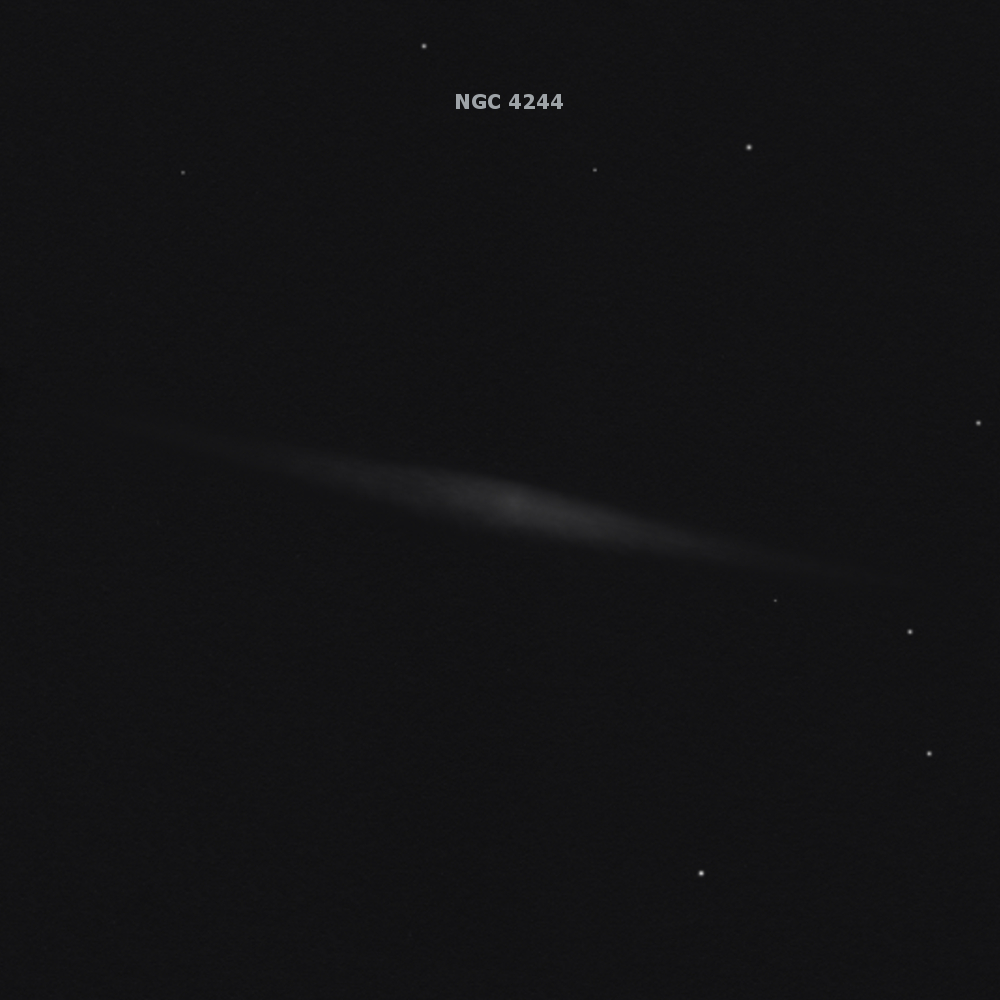 From NGC 5005 (C29), especially the core area is distinct. The nucleus is small and bright and the nebulosity is “smeared” out to the tips in a slight bend. The upper part of the thick needle is somewhat broader (more on the right side in the sketch). I don’t see a dustlane or spiral structure, but it still is a nice and large specimen. Sketched with the 16″ Alkaid @362x. 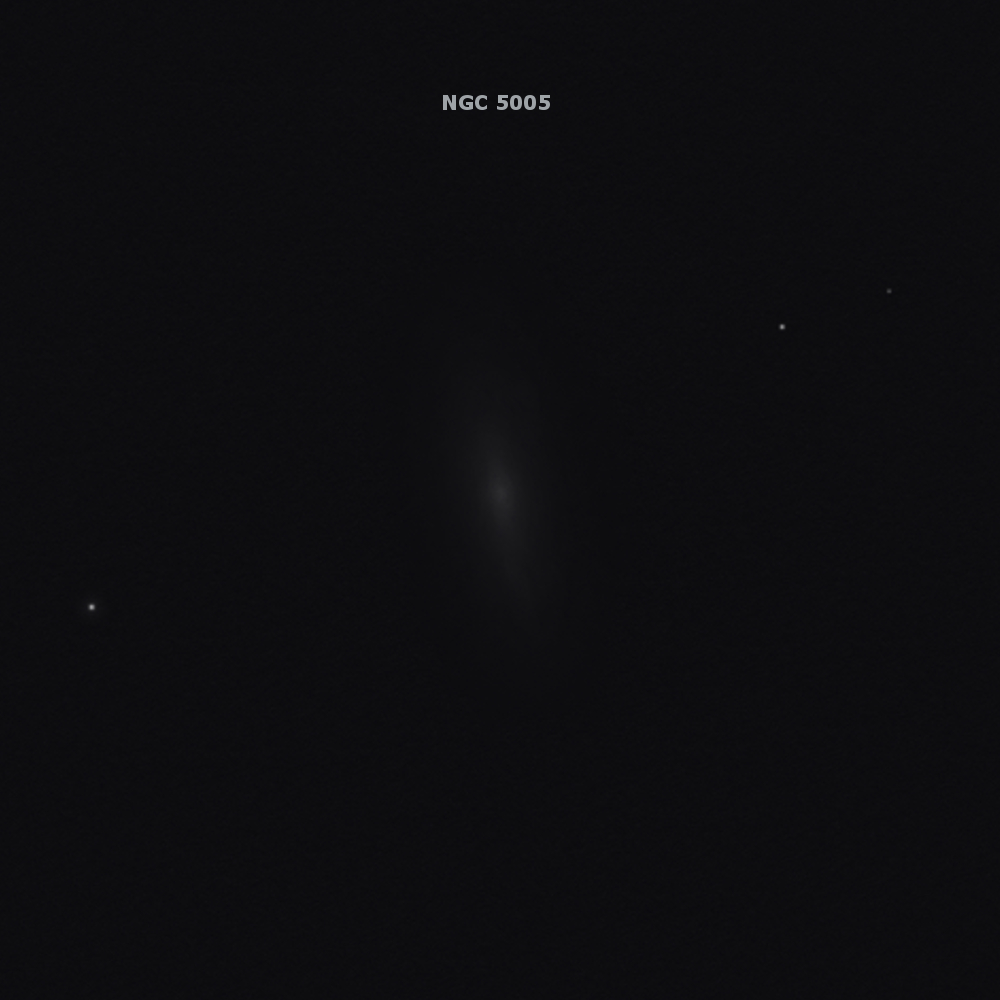 On to the Deer Lick group, with “mother” NGC 7331 (C30) as a thick needle. It’s large, bright and with a very bright and stretched core area and even brighter nucleus as a dot in the heart. Due to poor transparency, not much detail is visible unfortunately, but after extended observation a stretched “S” is noted and with that the direction of the spiral arms can be deducted. However no mottling is seen, let alone a dustlane. Four more galaxies in the same field are noted, the so called “fleas”, of which one (NGC 7336) is quite tough to see. Sketched with the 16″ Alkaid @259x. 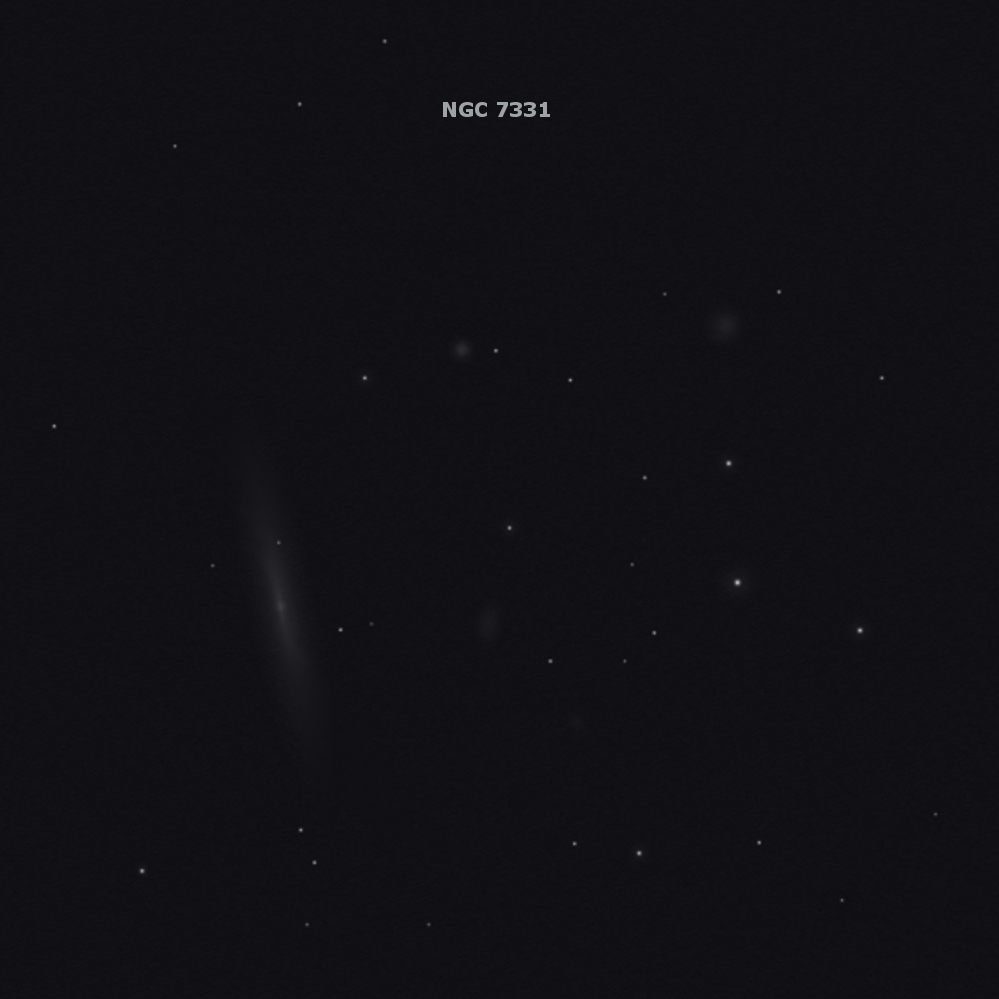 NGC 4889 (C35) resides in the heart of the Coma Galaxy Cluster and is its brightest member. It’s an elliptical galaxy, so not much more can be seen than a large, bright and almost round glow amidst four other nearby galaxies. The light fades out from the non-stellar core very evenly towards the edges. Sketched with the 16″ Canopus @ 361x. 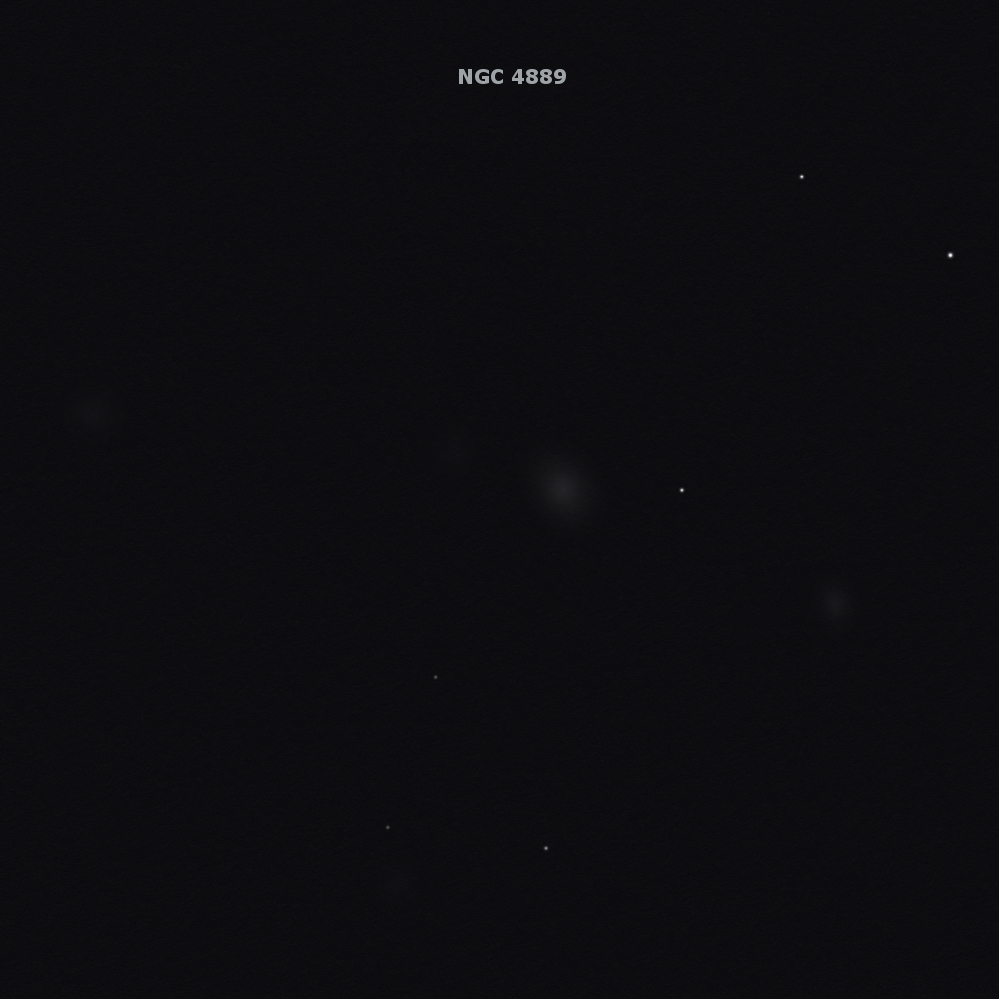 NGC 4565 (C38) or the “Needle Galaxy” is of course an all time favorite and did not disappoint the first time I saw it in the 16″. In the 7mm almost the entire field is filled with the long and thin needle. The dustlane is very distinct and the central bulge is clearly cut in half by it. However, it’s seen much better on the S side (up in the sketch). Showpiece! Sketched with the 16″ Alkaid @259x. 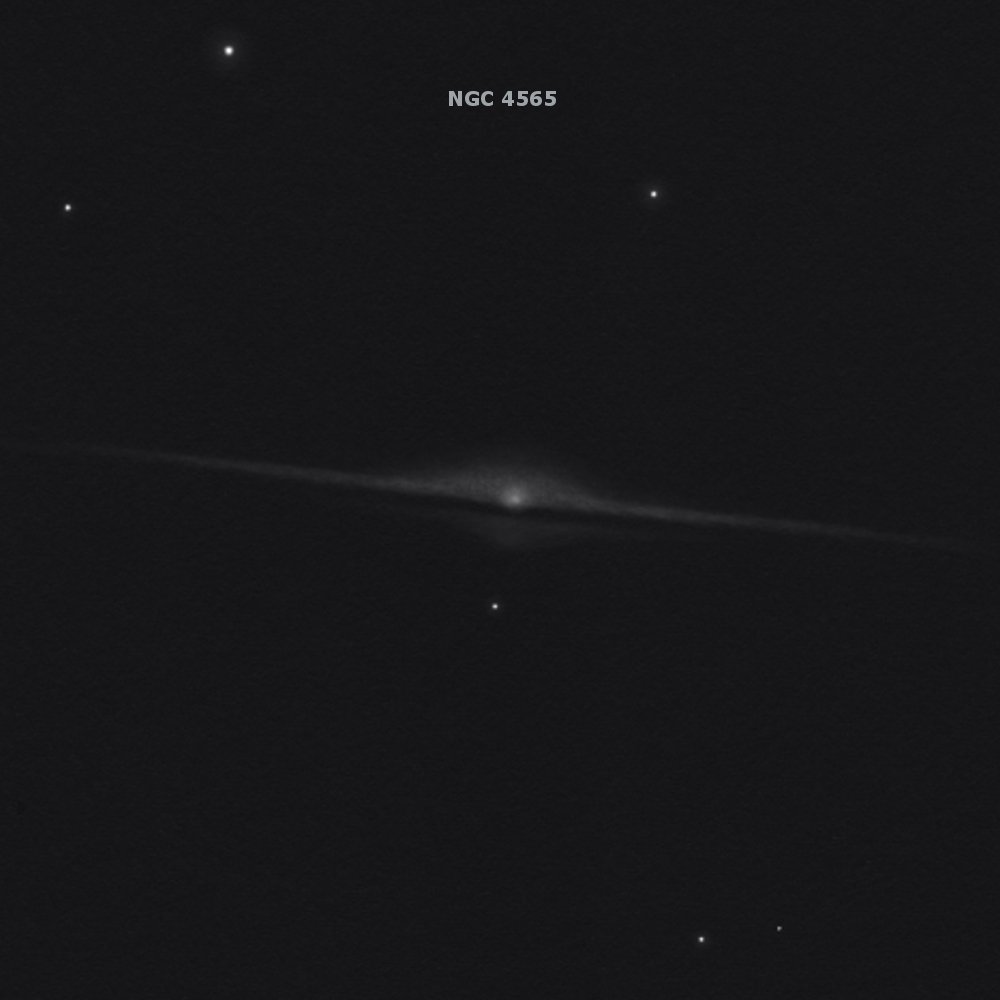 NGC 3626 (C40) is quite small, but very bright. Choosing a high magnification shows the shape well; in the upper side of the sketch the galaxy is somewhat flattened, giving the impression of a UFO. The bright, diffuse core is a round knot with on both sides protrusions on the longitudinal axis. Sketched with the 16″ Canopus @ 361x. NGC 7814 (C43) or “Mini Sombrero” is a (nearly) edge-on galaxy with a tough dustlane crossing its face. With direct vision, the galaxy appears round(ish), so the core is much brighter. But with averted vision, the elliptical shape can be seen. The dustlane is only visible when you know that it’s there and you really have to look for it. Very difficult! Sketched with the 16″ Alkaid @259x. 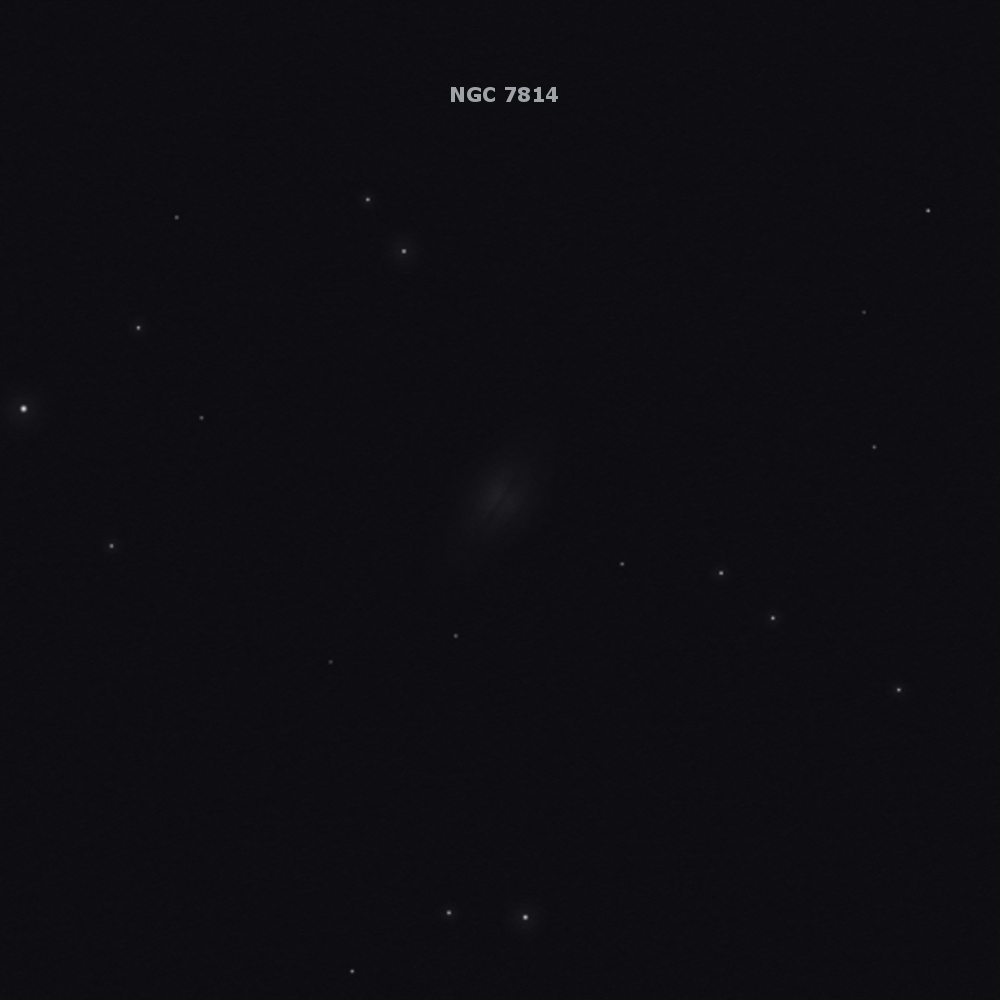 NGC 7479 (C44), aka the “Superman Galaxy” is a fine barred spiral galaxy with a huge and fascinating curl on the south side (up in the sketch and only seen with AV). The northern curl could not be glimpsed, only a slight curve at the end of the bar. The center is pretty bright and slightly stretched. Sketched with the 16″ Alkaid @259x. 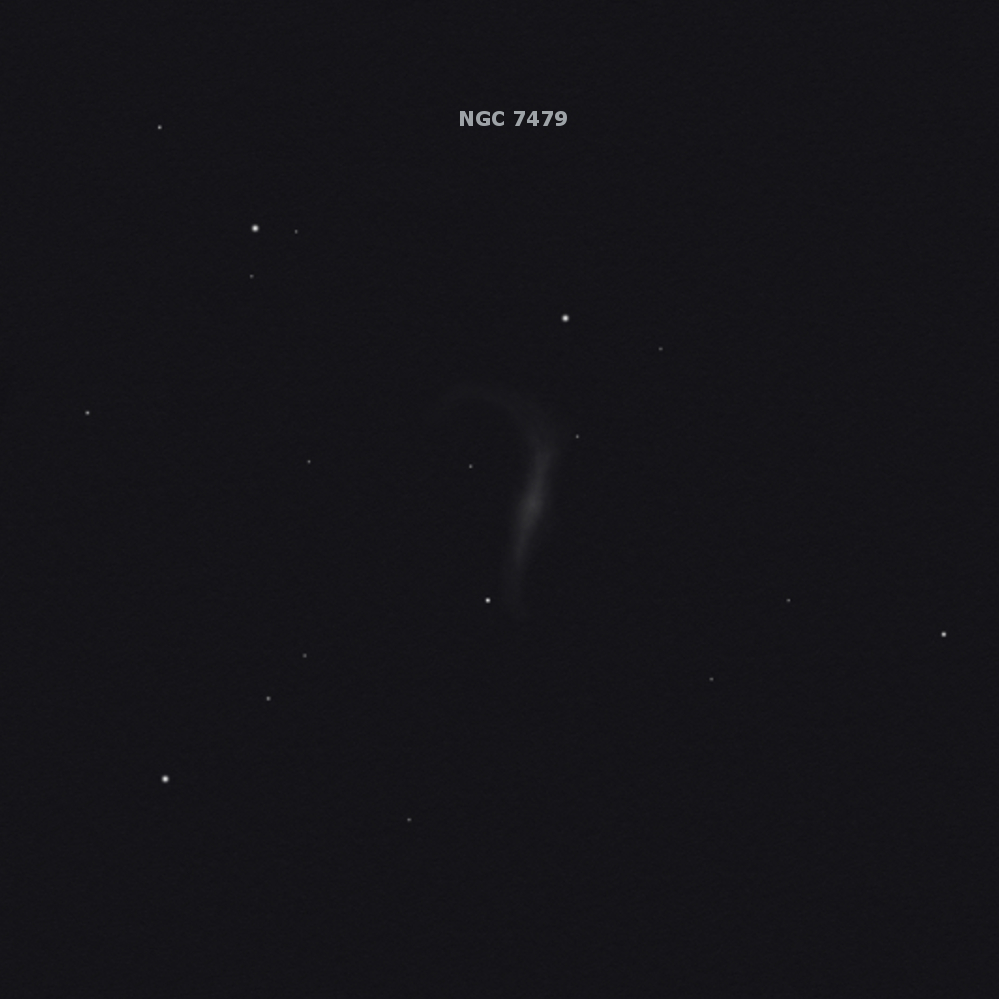 NGC 5248 (C45) is a spiral galaxy that is often overlooked. Under a good sky I could see both spiral arms arching away from the bright core, the western one (left in the sketch) a bit more prominent and broader. Both arms reached just outside of the almond shape of the galaxy. Sketched with the 16″ Alkaid @259x. NGC 2775 (C48) is an unbarred spiral galaxy, but unfortunately nothing of the tightly-wound spiral structure is visible. The shape is a bit that of an ellipse and the brightness increases strongly towards the stellar core. The galaxy seems edgeless. On the S side (above in the sketch) the brightness is a bit more defined and the nebulosity stretches out a bit farther (like an Eastern egg). There is a hint of a darker bow just under the core. Sketched with the 16″ Alkaid @259x. 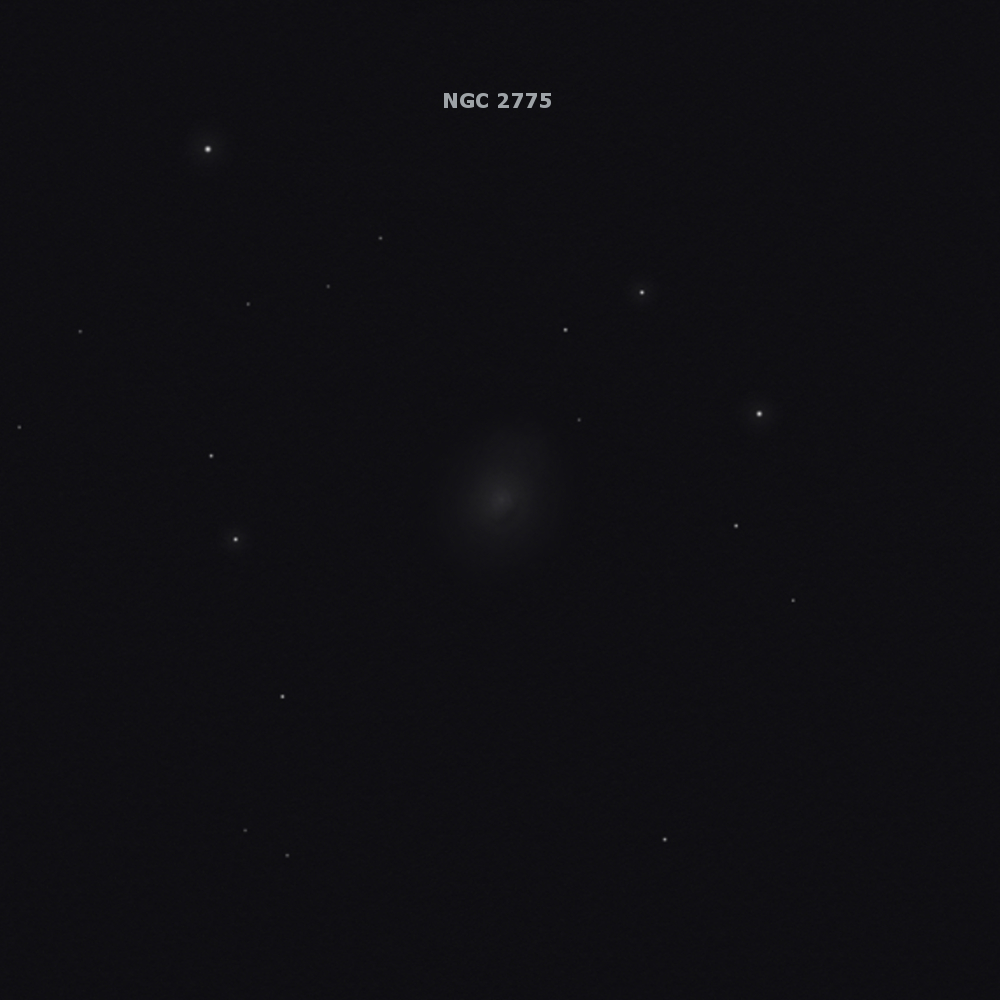 NGC 4697 (C52) is not very impressive, but it is bright. The shape is quite extended (2:1 or more) and from the core the brightness slowly dissipates towards the edges. no additional details are observed. Sketched with the 16″ Canopus @258x. 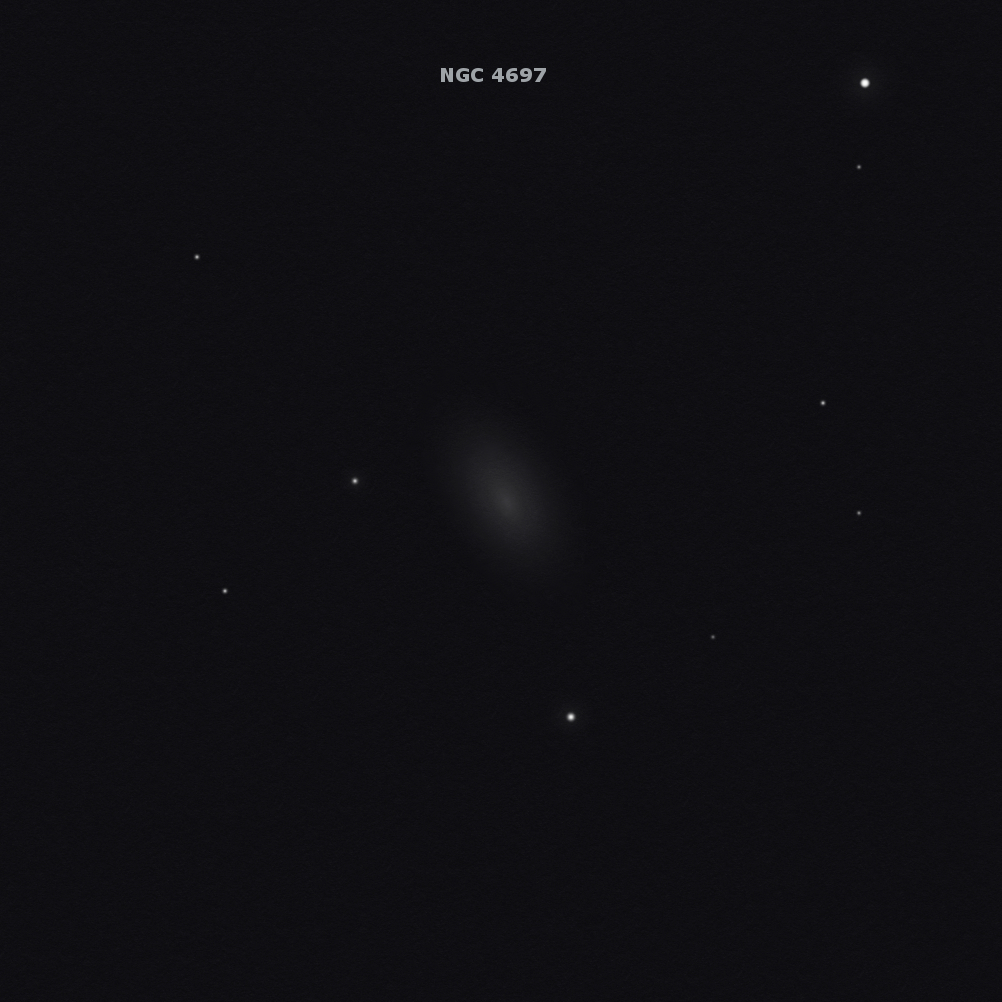 NGC 3115 (C53) the “Spindle Galaxy” is reasonably visible, but already low in my home sky. The stretched shape is noted immediately, just as the very bright, oval core zone. From there the light is evenly distributed towards the edge and no further details are visible. Sketched with the 16″ Alkaid @259x. NGC 247 (C62) “The Dusty Spiral” or “Needle’s Eye Galaxy” is an extended and fine looking galaxy under the dark sky of La Palma, even in the smaller 10″ scope that I brought with me. It has a bright, bit of a bean-shaped, core that seems to be a bit off-center. The southern extension (up in the sketch) is quite dim and narrow and curves its way to a bright star, which is just out of reach. The northern extension is brighter and broader and has a brighter patch near the tip, an indentation can clearly be seen on the east side. What a beauty! Sketched with the 10″ Alkaid @120x. I was taken aback by the size and brightness of NGC253 (C65), the “Silver Coin Galaxy”. What a monster! This one really has it all: it’s bright, has a large size, darker zones, brighter patches, mottling and woolly structure. You can almost feel the star-stuff swirling around when looking at it from nearly edge-on. A real showpiece. Sketched with the 10″ Alkaid @120x. 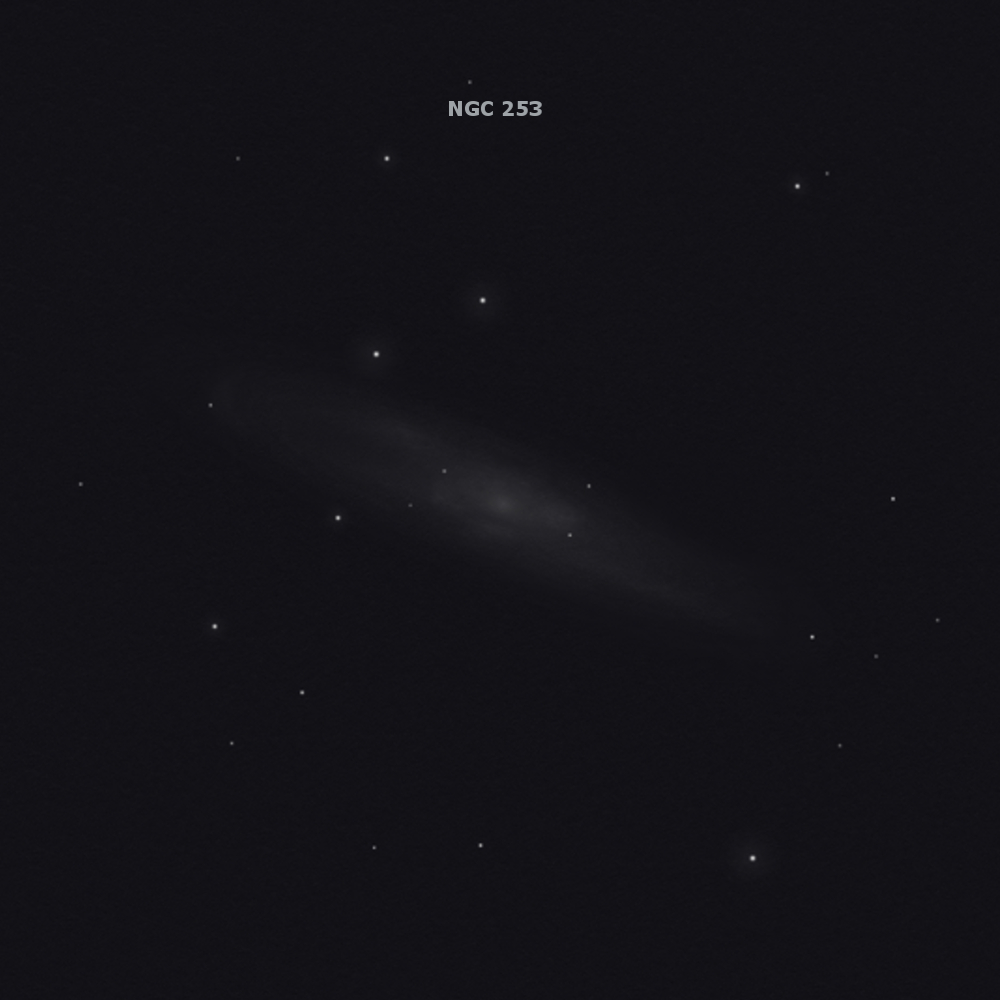 Next is NGC 55 (C72), the “String of Pearls Galaxy”. Even though it was a bit low in the sky (at max. 22 degrees at La Palma). I liked what I saw. The galaxy is a perfect edge-on but does not appear like a needle. Instead, the wedge shaped core area is shifted way to the W and and is divided in several brighter patches that appear to be separated by dark lanes. In the heart of this area, a stellar-like nucleus (or perhaps a foreground star) is visible and another small patch can be found more to the E. All the way to the E, the galaxy continues still to form another, glowing extension. This area is designated IC 1537 and was seen easily with averted vision like a comet’s tail. Between NGC 55 and IC 1537 there is a darker “gap”. What a beauty this must be when observed overhead with a bit more aperture! Sketched with the 10″ Alkaid @120x.